FGIA Conference Begins With Focus on the Post-COVID-19 Economy 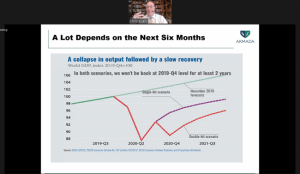 The Fenestration & Glazing Industry Alliance (FGIA) began its 2020 Virtual Fall Conference with a focus on the economy. Keynote speaker Dr. Chris Kuehl, managing director at Armada Corp. Intelligence, presented “Are We There Yet? Will 2021 Be Better than This Mess?”

Kuehl began his session by explaining how unclear data is surrounding the COVID-19 pandemic and how there are still many unknowns. He also pointed out that while the month-to-month unemployment data looks good, the year-over-year data is not.

Kuehl said that getting out of a recession usually relies on putting money into the hands of consumers so they can spend.

“The problem this time is that the consumer has had no place to go. If everything is closed, events are cancelled and travel is off, what are they supposed to do?” he asked, adding that as the lockdown loosened he started to see consumer impact.

Many unemployed people were receiving extra money, however much of that ended at the beginning of August. Kuehl explained that many of those people were low-income service workers whose economic impact traditionally is low.

“Most people are working and making what they always made. The challenge is access and the willingness of the consumer to do what they used to do,” he said.

He pointed out that millennials like to spend money on experiences rather thing things, and those experiences are now unavailable.

“We’re realizing now how much money was made at trade fairs, football games, concerts and going out to eat. Suddenly money is not circulating,” he said.

One trend Kuehl has noticed is a desire to diversify supply chains so there is less reliance on China. This would mean more robotics and automation. However, this comes with its own challenges.

Though Kuehl expects there to be a shift away from office construction as companies are more willing to allow their employees to work from home, but warehouse construction should rise, he said. There’s almost been a boom in the remodel market to accommodate people working from home. He expects mortgage rates to remain low, which is good news for the residential market.

FGIA’s executive director Janice Yglesias informed attendees that the conference has approximately 450 total participates with 90 new participants. She explained that the organization made some changes to this event based on comments from the summer conference, including providing more technical content.

FGIA cancelled its IG Fabricators Workshop, which was scheduled for November in Plano, Texas. However, Yglesias said FGIA had already been strategizing ways to move some of the workshop content to video in order to increase its reach. She expects that content to be released in January 2021.

A motion was approved during the general member session to temporarily amend the bylaws to allow Dave Sukut from Vitro Architectural Glass to fill the role of immediate past chairman until December 31, 2021. The position is currently vacant. It’s required that someone who is a Glass Products Council (GPC) representative, insulating glass (IG) producer member, Canadian member representative and has severed on the AAMA or IGMA board in 2019 fill the role. There was no one who completely met the criteria. However, Sukut is a GPC representative in Canada who served on one of the boards in 2019 and, as Vitro’s Canadian facilities manufacture IGUs, FGIA leadership feels he has the IG production expertise necessary to fill the role.

Yglesias also announced that meetings manager Florence Nicolici recently celebrated 35 years with the organization, including its years as the American Architectural Manufacturers Association prior to combining with the Insulating Glass Manufacturers Alliance to form FGIA.