The fenestration industry is rapidly evolving into a high-tech industry, and products that fit that description were inescapable at Fensterbau, the giant biennial trade show happening this week in Nuremberg, Germany. 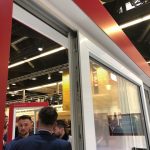 The Aluplast booth at Fensterbau featured its SmartSlide system.

Software companies had a strong presence at the show, which is appropriate because, much like the U.S., countries in Europe are struggling to find qualified labor for manufacturing.

A+W Software showed off its popular Cantor system, which integrates the online configurators of many suppliers to the door and window industry  into one software solution.

“It’s having a good, positive trend for us,” he said, adding that the ongoing global recovery in construction is helping as well.

“Industry 4.0 and the Industrial Internet of Things (IIOT), all that is a big trend, and it’s getting a lot of people to our booth,” Dixen said.

Windowmaker Software saw a lot of interest in its Measure mobile app for smartphones.

“When you start using it, you can add your dimensions and your colors,” said director Rima Singh. “This is what is attracting people today. People are not talking to us about fabrication software anymore. They’re talking about software for surveying or software for final measurements. Everybody’s wanting to go mobile.”

Singh said the show has been “absolutely brilliant” for Windowmaker, adding that the company got several strong leads.

Orgadata has been providing its software to the European market for almost 20 years, but in September 2017, the company acquired U.S.-based LogiKal, which calls itself the world’s most widely distributed fenestration software.

“We’d been partners for a very long time,” said international public relations director Christine Gadow. “It made sense because the American market is getting more and more important for us.”

Attendees from the U.S. are still relatively uncommon, but the word is getting out about Fensterbau’s importance to the global fenestration industry.

James Gelina, the vice president of research and innovation with Andersen Windows, and Rob Garofalo, Andersen’s senior business manager, were impressed by the show.

“We saw a lot of the contemporary themes with the asymmetrical stationary panels on the gliding doors,” said Garofalo. “That and the edgeless sash members with glass all the way to the edge of the windows.”

They also noticed the huge booths and the emphasis on hospitality at Fensterbau.

“It’s a ton of money, I’m sure,” said Gelina. “You almost have to wonder how much business they actually conduct at the show.”

David Decker, president of Boral Windows in Texas, was also a first-time attendee.

“What an awesome event,” he said. “Talk about innovation. It’s a lot different than what we see in the States. I’ve seen where windows are evolving. Can’t wait till next time.”

Attendees crowded into Rehau’s booth to see its Smart Window Solutions, including its SmartGuard system for burglary prevention.

Another innovation grabbing attention was its Smart Blind system. With a quick touch, the glass is darkened to ensure privacy. Showgoers couldn’t get enough looks at the innovative display. The company also showed off its Innovent system which filters out everything, including pollen, and only requires a filter change one time per year.

At the Renolit booth the company went back to basics with its “Das original” theme, as the company points out that it introduced the first exterior films 30 years ago. Additionally, the 20-year warranty for the Renolit EXOFOL FX films has now gone global, said David Harris, product manager. The new warranty periods are the results of extensive testing under laboratory and natural weathering conditions.

Renolit also created a Product Marker so its films can now be distinguished from imitations, which does happen often in other countries, said Harris. Now, even 20 years after an installation, it will be possible to identify Renolit films that have been laminated onto a profile.

The company also is launching a repair service, and in the U.S., customers will come together in Chicago in April to learn how to do repairs in the unfortunate event that a film is scratched during installation.

“Before you had to take the window out, but now we can train you on how to do a repair,” said Harris.

That’s a great deal of products, and the same was the case at the Aluplast booth, where the company showcased its SmartSlide System.

“The product has the same performance characteristics of a tilt and turn as it operates with a compression seal,” said Frank LaSusa, USA managing director. “You can lock the sash in any position, but the manufacturing process is much simpler.”

Two years ago at Fensterbau, Aluplast showed a sample of a cross-section of the product, then in development, so was excited to introduce it here two years later.

“The product rotates the sash to create the seal. When you open the door the sash pulls away from the frame,” LaSusa added. “The hardware does the work and then it locks in place, and the same compression seal locks all the way around.”

Sherwin-Williams’ European operations had a large booth at Fensterbau displaying water-based coatings for window profiles, including transparent ones for wood. Joost Segeren, the sales manager for the Benelux countries (Belgium, Netherlands and Luxembourg), said Sherwin-Williams is starting to make a big push into Europe.

Hawa brought a selection of its sliding solutions for buildings and home furnishings, including the Junior 80 B pocketed sliding interior door.

The company says it features a high degree of pre-assembly that prevents contamination of the running track during the construction phase. It also comes with a completely overhauled suspension mechanism, clip-on panel for invisible transom fixing, a new shortened floor guide with zero clearance and a door ejector.

Fensterbau continues through Saturday. Stay tuned to dwmmag.com for updates. For more photos from Fensterbau, follow our Instagram page.