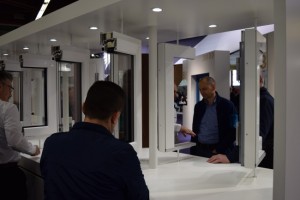 Fensterbau attendees examine some window profiles at the show.

Fensterbau wrapped up its four-day run in Nuremberg, Germany, on Saturday with smaller crowds, but the innovative European door and window products continued to captivate.

Profine showcased its 88 mm system, an extension of its 76 mm system that’s offered in the U.S.

“We are trying to get people to understand the importance and benefits of a tilt-and-turn window,” says Gareth Parton, vice president sales and marketing, profiles division.

It seems many are starting to get it, according to profine’s Robert Thiroff, chief sales officer.

“In North America, they are embracing Europe,” he says.

At the VEKA booth, along with an abundance of product introductions, the company added a new feature this year. It added a second floor to its set-up where attendees could go in and view innovations currently in the works, such as the five new colors for the VEKA Spectral line.

David Harris, product manager, North America for American Renolit, affirmed what many have been saying — there was a high caliber of U.S. attendees at Fensterbau. The company showcased its EXOFOL which is ideal for the variety of U.S climates. 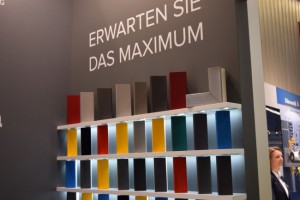 He said global shows like this one are a great opportunity for its employees from all over the world to gather and share trends with one another.

Hornschuch also showed off its exterior laminates for window profile wrapping. The big news here was the launch of a third metallic design to its range of color options.

“In the U.S. this would be of particular interest to those working in commercial applications,” says representative Marco Patermann. “The metallic series allows U.S residential companies to enter the commercial market.” The company offers the new metallic in a variety of designs including brushed, cross hatched, etc.

“New to these machines was a brand new slot nozzle which is the toughest on the market,” says Patermann. “The machine offers easy maintenance and it won’t scratch.”

Hardware supplier G-U was packed throughout the show and divided its booth into areas showcasing all the different options available. These included: the smart home, the future of sliding, secure entrances and exits, and efficient solutions for doors.

Windowmaker Software displayed the full range of its products, including its popular smartphone app Windowmaker Measure that allows builders or homeowners to use digital photos to estimate sizes for doors and windows. 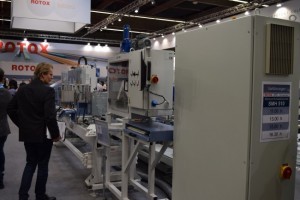 Machinery is always a major focus at Fensterbau.

Canadian company Novatech showed off its line of steel door panels, including a new product that meets the strict Passive House standards.

Ventana’s booth featured one of the show’s more innovative products – a window that can ventilate a room without being opened.

The Inovent window features two air lines built into the frame that move indoor air to the outside and pull  fresh air inwards. Through a heat exchanger, the incoming fresh air is adjusted to meet the temperature of the room. An integrate  pollen filter cleans the air. The window could be controlled with a fob, wall unit or even a smartphone app.

“This must be done because the homes (in Europe) are so airtight that it can create mildew,” said Tony Pauly of Ventana about Inovent, which is made in collaboration with Rehau. “Rehau developed the frame and the concept. Ventana did the fabrication because of our ability to do custom work.”

The window is not on the market yet, but Pauly said it should be available in Europe this fall.