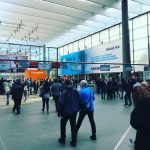 Fensterbau Frontale closed out its four-day run in Nuremberg, Germany on Saturday with smaller crowds, but that’s typical for this massive trade show that otherwise generates huge attendance and a lot of positive feelings in the global fenestration industry.

“We had more than 200 visitors a day, so it was very busy,” said Dominik Hinzen, managing director of C.R. Laurence of Europe.

“We had a lot of customers come to our booth over the past four days,” said Paula Morawska, a sales representative with MFO, a Polish maker of profiles. “In my opinion, the show is perfect, because it’s dedicated to one topic — windows.”

“This show is just so unbelievably innovative,” he said. “It’s always been impressive. When you’ve got 12 halls that are just floor to ceiling booths that are just off-the-chart elaborate and stylized. As a machinery person myself, I just love walking around the show. Everybody’s got something new.”

Emmegi’s big booth featured a couple of new products, including the Comet R6 five-axis, fully enclosed CNC machining center. According to U.S managing director Alberto Costa, the product will be available here in 2019.

Bystronic introduced its EZ Lift system. (For more about this machine, see DWM’s video.) The vacuum cups are extendable to work with larger glass sizes. The machine also has a vertical rotating function that makes it easy to bring the glass into the frame.

Urban Machinery introduced a seamless welder with a special cutting function, according to Mitchell Heckbert, vice president, sales and service.

“We will be considering the commercialization for North American markets toward the end of 2018,” he said.

“It was an excellent show,” said Patermann.

Centor featured its screen and shading systems for retractable doors. It showed off six options including its S2 screen designed ideally for French doors and XO sliders. The S5 screen is a wood-clad retractable windscreen. The S6 features an aluminum frame with both a retractable screen and shade. The company exhibited here after a long absence, and Jim Thornton, president, said it’s been really busy, particularly with attendees from many of the Asian countries.

Roto featured four themes in its packed and expansive display: comfort, efficiency design and security, all centered around its Roto NX line.

“This is an evolution of the most sold tilt and turn system in the world,” said Chris Dimou, president, the Americas.

Dimou also explained that Roto has been expanding beyond just hardware products with acquisitions of companies related to sealants, tooling and more.

“We are expanding beyond the traditional hardware,” he said. “We are a total solutions provider.”  (For more on Roto products, see DWM’s video.)

Technoform  introduced a new material, low lamda, that improves the U-value of a unit, but that’s not even the biggest selling point.

“Customers can save material as using this as it shrinks the size of the sash,” said Pierre Schlosser, manager marketing and public relations. “That’s a big savings if you have an 80 versus a 90 mm system.”

Technoform currently offers 39 profiles with this new material, he added.

Profine’s huge booth featured one of the more interesting coating products — Procovertec, an all-new vacuum-painting process that imparts a metallic sheen to profiles. It’s not currently available on Kommerling products in the U.S., said Gareth Parton, the vice president of sales and marketing for Kommerling USA’s profile division.

Inotherm had a couple of displays in the halls showing off its beautiful high-end doors. The company isn’t in the U.S. yet, but a spokesperson said they’ll be part of a couple of projects in the Los Angeles area this year.

Ventana showed off an interesting prototype of a lift-and-slide door with a magnetic latching system that should be ready for the European market later this year.