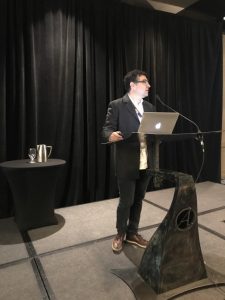 Canada’s WinDoor show, scheduled for December 3-5 in Quebec City, is a full six months away. However, planning has been underway since last year’s show wrapped up in Toronto, and the big event was a major focus of Fenestration Canada’s annual general meeting, which just wrapped up in Calgary.

According to WinDoor organizers, booth sales are running about 55 percent ahead of this time last year, and the WinDoor website shows that 42 exhibitors have already signed up for the event.

A tentative WinDoor schedule is available on the event’s website. It shows that an opening reception is set for the first night at the Quebec Convention Centre, followed by a Dine Around evening in historic Quebec City that will feature stops at a selection of restaurants. It’s similar to the  movable feast around Old Montreal at the 2016 show that stopped at three unique restaurants for cocktails and small bites.

There are plenty of educational sessions on the schedule as well, a feature of the 2017 show in Toronto. However, the full educational program hasn’t been completed yet.

WinDoor organizers want to make the event more appealing to a broader segment of the door, window and glass industry. To that end, Fenestration Canada is looking to boost commercial education sessions and get more companies in commercial fenestration to exhibit at the show.

As Canada prepares to embrace more stringent construction standards to conserve energy, passive house construction is starting to generate more discussion. Calgary-based architect Oscar Flechas gave a presentation to the Fenestration Canada annual general meeting about the passive house standard and what it means for fenestration.

Flechas says he thinks “conservation house” is a much better name for this type of structure, which can reduce energy consumption by up to 75 percent. He also says passive house has much more clearly defined standards than net zero, which refers to zero net energy consumption. That means the total amount of energy used by the building each year is equal to the amount of renewable energy created on the site. As an example, California recently enacted a regulation requiring all new residential construction to be net zero by 2020 through the use of solar panels.

Flechas says that while the standard is called “passive house,” it can be applied to many types of structures.

For airtightness and insulation, attention to detail is critical, Flechas says. Every possible opening in a building’s envelope must be sealed.

Passive House standards require doors and windows with an R value (the capacity of an insulating material to resist heat flow) of 8.7. That means a window must have insulation, air tightness and be free of any thermal bridges, Flechas says. It also must capture more heat than it loses.

The passive house niche is growing, albeit slowly. Flechas says there are at least 44 passive buildings in Canada today. In 2010, there were zero.