A new study on fatalities in the construction industry reinforced many previous conclusions regarding the sector’s safety practices, but it also ran contrary to some long-held assumptions.

The report, Preventing Fatalities in the Construction Industry, was compiled by the Associated General Contractors of America (AGC) and the Myers-Lawson School of Construction at Virginia Tech University. It covered every construction fatality that took place over a three-year period (2010-2012). 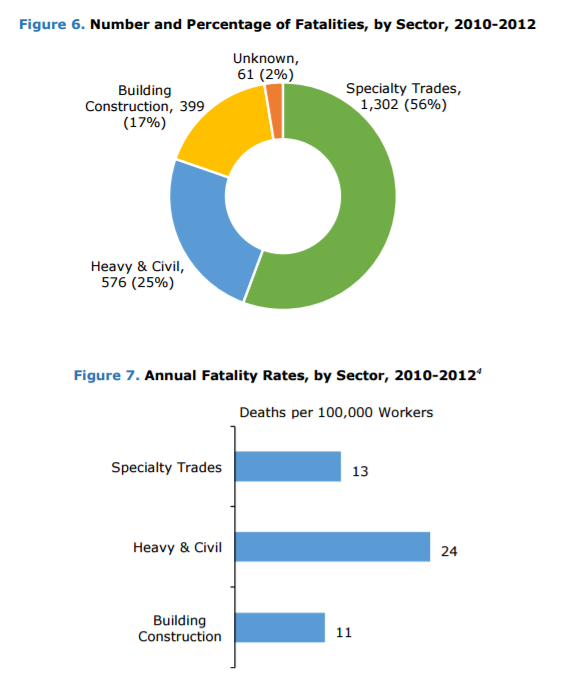 From “Preventing Fatalities in the Construction Industry” report by the Associated General Contractors of America and the Myers-Lawson School of Construction at Virginia Tech University.

Falls remain the top cause of death in construction, accounting for one-third of fatalities. And while the heavy and civil sector had the highest annual fatality rate, the specialty trades group had significantly more fatalities than any other sector, responsible for 56 percent of deaths.

These categories were consistent with previous findings, though the time-of-day observations yielded an interesting result. According to AGC, prior research indicated most construction fatalities occurred in the morning, but the new report suggests noon is the deadliest hour.

“Most fatalities occurred between 10 a.m. and 3 p.m., with a peak at noon,” the report reads. “Previous studies found that occurrence of fatalities was most dominant between the hours of 9 a.m. and 1 p.m., and bottomed around noon.”

Additionally, small establishments with fewer than ten employees accounted for 47 percent of fatalities and the highest fatality rate annually. AGC notes that most previous studies ignored the smallest firms.

Industrial project locations experienced the highest number of fatalities at 35 percent, while residential and heavy project locations accounted for 25 and 29 percent, respectively. Commercial represented 5 percent and the “other” category 6 percent.

“Constructing” activities, which include installing, building, assembling and repairing, accounted for 49 percent of fatalities. Workers 35 to 54 years of age made up 50 percent of fatalities. “Ratios suggest a steady increase in the fatality rate from age 35, with the peak among workers age 65 or more,” the study states.

The 30-page report outlines actions that can be taken to address each of these findings.

“We all share a common goal: getting to zero construction fatalities,” says AGC CEO Stephen E. Sandherr. “This report offers the kind of data and recommendations needed to help construction firms achieve that goal.”