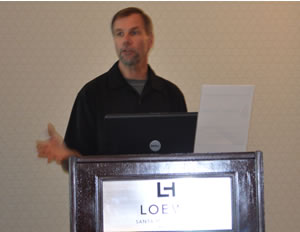 Ivan Eastin gave MMPA atttendees a market overview and gave them some ideas for future opportunites.

Members of the Moulding and Millwork Producers Association (MMPA) are meeting this week in Santa Monica, Calif., and Ivan Eastin, professor/director, CINTRAFOR, gave an update on the moulding market both in the United States and abroad. When it comes to mouldings, he reminded attendees just how much of a beating the market has taken.

“The housing bust had a big impact on all industries. Lumber was hit particularly hard,” he said. Speaking to specific materials, he pointed out that wood mouldings are on the decline as they are being replaced by MDF and plastic PVC.

Regarding wood exports, Eastin said companies are employing a reactive strategy instead of a long-term export strategy. He challenged them to re-think this.

“For exports the recession in 2009 really hit this market badly,” said Eastin. “But as far as U.S. trade goes, things are turning around and starting to look better.”

Imports of wood mouldings, largely from Brazil and Chile, still remain relatively low. However, “The Europeans are something to worry about,” he said.

The big question, according to Eastin, is how will China fare during the recovery? “Regarding solid wood, China is importing more than it is exporting,” he said.

There is a lot of building to be done here as, “The middle class in China is growing faster than has happened anywhere—ever!”

“This is almost incomprehensible but they already have 7 million housing starts in construction but these are concrete shells,” said Eastin. However, he pointed out that China offers a great opportunity for wood-frame construction as this is more energy efficient and the country is looking toward greater use of this material.

China is not the only country where growth opportunities lie–Japan is now ready to rebuild, one year after its earthquake. Eastin suggested going to international trade shows to see where the opportunities are in these and other countries.

Eastin also talked to attendees about the Lacey Act, which requires end users of endangered wood to certify the legality of their supply chain. While companies are aware of the long-standing Lacey Act, he offered some ideas on how to use this as a competitive advantage.

“So many countries are scrambling to get chain of custody certification,” said Eastin. “So how can we take a look at suspect wood and turn that into a demand for U.S. wood?”

The MMPA meeting continues this week. Stay tuned to dwmmag.com for future updates including a session on “How to Export your Products.”