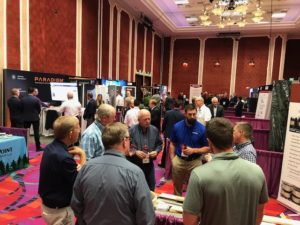 WMA exhibitors say the environment is great for “deals”

World Millwork Alliances’ Annual Convention and Tradeshow is no International Builders Show. It doesn’t pack numerous exhibit halls the size of football fields. (Getting from one side to the other is more like reaching a first-down marker.) But the show also doesn’t carry the fat of outlying products, consumers and services—all of which can clutter opportunities for business dealings, exhibitors at this year’s show said.

“Everything here is directly relative to what we all do,” said Ron Johnson, business development manager for Alliance Door Products.

Meanwhile, by attracting executives from the door and millwork industries to a smaller and more relative venue, “There are deals that can be struck here,” Johnson and other exhibitors told [DWM]. 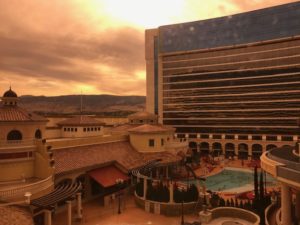 There were no mammoth booths at this year’s show. Instead, there were exhibitors showing a modest number of door products and small- to mid-sized booths, stocked with products such as components, accessories and millwork samples—items that attendees could easily get their hands on to sample.

A small table in Doorframer’s booth had items for packaging and protection fanned out over a table. A cutaway of a door bottom displayed how the company’s latest retainer clip for double doors gives assemblers the option of inserting screws through the bottom of the door slab or attaching to a runner by staples. Quanex, which is known for its massive displays at shows like GlassBuild, had a table setup, displaying products like a door sill replacement deck that adheres over damaged sills and a temporary cover that snaps on for protection. VantagePoint Industries displayed weatherstripping in the center of its table, like a bouquet of flowers. 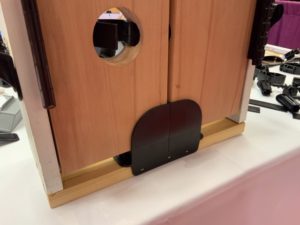 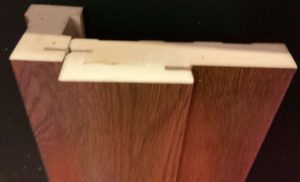 GPI Millworks displayed a fiberglass jamb that doesn’t require any routing for hinge attachment. The jamb also features a snap-on moulding that serves as a cover. In ODL’s booth, the company focused on Zeel, a door glass frame that attaches via metal clips, instead of screws. The product installs by tamping into place, also including a foam seal that removes the need for caulk or liquid-based sealants and it can be pried off for door glass replacement, said Amy Post, ODL’s national marketing manager.

One area that hasn’t seen its fair share of innovations includes mouldings and millwork, as exhibitors of those products readily admitted that they haven’t changed much over the centuries (aside from new materials). But with little new to lean on, mouldings manufacturers said they aren’t missing out on some of the latest trends—at least one of which is driving sales upward.

As age-old products like shiplap make a comeback, “This industry should send a check to Joanna Gaines,” said Craig Young, with TLC Mouldings, referring to the star of HGTV’s Fixer Upper series. “Every house she does has at least a focal wall in it with some type of dimensional moulding or shiplap,” he said, which is helping to drive consumer interest. As a result, what companies have lost through decreased interests in mouldings like crown and chair rail, they’re making up in shiplap and one-by materials (one-by-fours and other dimensional mouldings), said Taylor Yancey, sales manager for Arauco.

“We joke and call it the ‘Chip and Joanna’ effect,” Yancey said.

In its final day, exhibitors tell [DWM] that WMA’s show has never been about tying down a flock of new customers. Instead, it’s about, “Just owners and decision-makers,” said Sergio Casas, a sales representative for Neuma Doors. After making what some exhibitors refer to as a comeback after the Great Recession, industry consolidations have drawn down the show’s size a bit, one exhibitor said. What it lacks in size, exhibitors said it makes up for in potency.