Environmental Protection Agency (EPA) Administrator Scott Pruitt issued a directive on Tuesday that will end “sue and settle” practices, which the agency says will provide “an unprecedented level of public participation and transparency in EPA consent decrees and settlement agreements.” 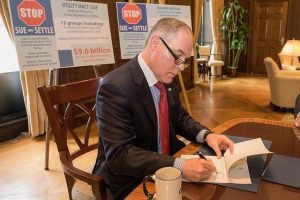 EPA Administrator Scott Pruitt signs a directive to end “sue and settle” practices within the agency.

“The days of regulation through litigation are over,” Pruitt said. “We will no longer go behind closed doors and use consent decrees and settlement agreements to resolve lawsuits filed against the Agency by special interest groups where doing so would circumvent the regulatory process set forth by Congress. Additionally, gone are the days of routinely paying tens of thousands of dollars in attorney’s fees to these groups with which we swiftly settle.”

Under “sue and settle,” the EPA and a group that filed a legal challenge would agree in principle on the terms of a consent decree or settlement before the public could review it. According to the Window and Door Manufacturers Association (WDMA), the process was used in 2010 to remove the “opt-out” provision of the controversial Lead: Renovation, Repair, and Painting Rule (RRP) for homes without a child under the age of six or a pregnant woman. By removing that, the agency more than doubled the number of homes subject to the RRP rule.

The RRP greatly increases costs for widow replacements. According to WDMA, manufacturers and remodelers say that a standard window replacement project complying with RRP is more than $1,000 more expensive than it would be without the compliance requirements. That’s far higher than the EPA’s estimate of $35 to $376 in extra costs per project.

In August, WDMA announced that the association is working to secure a meeting with high-level officials at EPA to discuss unresolved issues with the RRP rule.

WDMA expressed support for Pruitt’s directive in a statement.

“WDMA is pleased that EPA has made the ‘sue and settle’ process more transparent for the public,” said Michael O’Brien, WDMA president and CEO. “By requiring the changes detailed in Administrator Pruitt’s directive, stakeholders will have more opportunities to participate in agency rulemaking and ensure regulations work effectively for all affected parties.”

WDMA also supports two pending “sue and settle” bills in Congress that would require agencies to disclose information about lawsuits and settlement agreements to Congress.

The National Association of Manufacturers (NAM) supports the end of “sue and settle” as well.

“As the entities primarily regulated by these settlement agreements and consent decrees, it is simply not fair that manufacturers are regularly left in the dark as EPA and other non-regulated entities work out the terms of our regulation behind closed doors,” said NAM vice president Ross Eisenberg. “Allowing an open, transparent settlement process that abides by the law is the right policy.”

“It is encouraging to see the administration announce that it will no longer surrender to litigious groups abusing the legal process to impose new, unworkable burdens on the business community,” said AGC CEO Stephen E. Sandherr.  “By putting an end to back room agreements, the administrator is making sure that all affected parties have an opportunity to contribute to the discussion about measures needed to protect our environment.”

Pruitt’s order will require timelines for public notices of complaints against the EPA.  It also increases outreach to industries affected by consent decrees or settlements and prevents attorney fees and litigation costs from being included in any settlements. EPA will now publish any notice of intent to sue the agency within 15 days of receiving one. According to the directive, any proposed or modified consent decree or settlement will be published for a 30-day public comment period, and a public hearing may be held if one is requested.

Andrew Grossman, an adjunct scholar at the libertarian Cato Institute in Washington, D.C., testified before Congress in 2015 and 2017 about “sue and settle,” noting that these consent decrees create an “artificial urgency” that leads to the rapid proliferation of new regulations. They also give organizations that initiate settlements undue influence within the government.