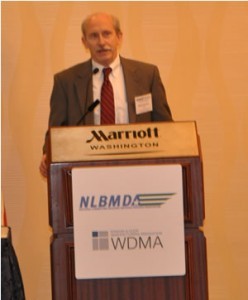 The EPA's Don Lott said more LRRP cases will be filed in the coming months.

“There are a lot of cases in the pipeline and many others under review,” said Don Lott, Environmental Protection Agency (EPA) associate director, waste and chemicals enforcement division, when he presented updates regarding enforcement of the EPA’s Lead Renovation Repair and Painting Rule (LRRP). The information was given to members of the Window and Door Manufacturers Association (WDMA) and the National Lumber and Building Material Dealers Association (NLBMDA) who gathered this week in Washington, D.C., for the associations’ joint legislative conference. The lead paint rule topped the agenda items in many of the meetings.

But it was in the Lead Rule Issues Panel that Lott outlined particular aspects of the rule including updates regarding enforcement.

“We have a consistent national approach to how we assess penalties, which gives an even playing field,” he said.

He added the EPA gives its regional offices general guidance each year on lead enforcement. “Because they [regional offices] deal with multiple lead rules we ask the regions to come up with an integrated strategy.”

While Lott said the EPA has several lead paint programs he did admit that because the LRRP rule is the newest most of its resources are directed here.

“Our main goal is making sure lead safe work practices are in effect,” he said.

Lott answered the question that he says the agency is asked most: Do we use the list of certified firms as a target list? “Absolutely not,” he said.

Personally, I’d like to see more on-site inspections and I think we will see more of those,” he said.

The EPA has performed more than one thousand inspections to date, has issued more than 40 notices of non-compliance and more than 30 pre-settlement negotiations are ongoing. Additionally, two RRP complaints were filed—not settled–and according to Lott, “Many more will be issued over the next few months.”

“Of those one thousand, a lot of non-compliance is being found but it is a question of how bad it is … The majority of our tips reveal non-certified firms,” he said.

“We do need your help to identify those,” he added.

Look for more on the EPA’s lead rule in DWM’s March newscast, which will air next week on dwmmag.com.