Representatives from the U.S. Department of Energy (DOE) and the Environmental Protection Agency (EPA) provided an update this week, outlining the final phases toward Energy Star Version 7.0 for doors, windows and skylights. The session was provided as part of the National Fenestration Rating Council’s (NFRC) Spring Committee Meeting. 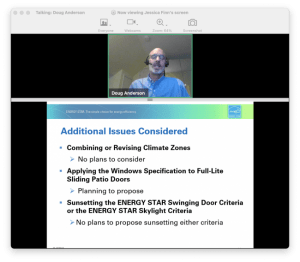 “We’re getting close,” said Doug Anderson, a project manager for EPA, “but aren’t ready yet.”

Before proceeding with his update, Anderson began by addressing an issue raised earlier in the week by NFRC CEO, Deb Callahan, in which Callahan said her organization made a “misstep” in meeting deadlines for several program-related deliverables. Those issues have since been fixed, both assured.

“As Deb mentioned on day one, there was a verification testing issue with the EPA Energy Star verification testing program at the end of last year and the beginning of this year,” Anderson said. EPA requires that 5% of active Energy-Star-certified product lines undergo verification testing annually, to maintain the integrity of the program, he said, adding, “As I’ve said many times in front of this group—this is the promise we made to consumers, to our upper management at EPA and even to Congress. This is the way we check to ensure that Energy Star is delivering for consumers.”

NFRC was behind schedule in recent years in meeting its part of verification testing requirements, Anderson said, adding, “We tried to correct that and it didn’t work, so we set a deadline of March 1 of this year … and NFRC, I have to say, really rose to the occasion. They put all hands on deck and we got caught up.”

The council has “gotten out of the gates” early this year, he assured, and all manufacturers have been contacted to get the verification processes underway.

Moving on to a timeline for Energy Star Version 7.0, little had changed, Anderson said, since he shared the same plan in fall 2020. “It’s just that we’re much closer to the box that says ‘proposed criteria,’” he added. EPA is still gathering data, after which it will perform internal briefings and “a lot of writing,” he said.

In developing the latest iteration of requirements, the administration has broadened its data sets for products from around the eight million used in Version 6 to 14 million for Version 7—including a “matrix” of U-factor and solar heat gain coefficient (SHGC) combinations for each location. As a result, “We have a much better look at energy flow for each location,” he said.

Based on the resulting data, despite suggestions stemming from comments raised in 2019, program officials have no plans for revising climate zones, he said. “We looked at an entire matrix [of performance data] and they aligned well with the original zones that DOE set up way back in Version 5,” he explained. In cases where individual counties have moved from one International Energy Conservation Code (IECC) zone to another, Energy Star will follow those changes, he said.

At the same time, program officials are embracing another idea that surfaced for full-lite sliding patio doors, Anderson said, which calls for applying the same specifications for Energy Star windows. “We’ve already done that for [the] Energy Star Most Efficient [program],” he said. The decision to pursue those changes followed a survey of manufacturers, he said, in which they confirmed they’re able to use the same IGUs in both products.

The administration is hoping to release a report for Version 7.0 and possibly draft one by the end of May, Anderson said. One to two weeks later, DOE will then host a virtual meeting to go over criteria, after which there will be a 30-day period for comment. A final draft is expected to be prepared by third-quarter 2021.