At a luncheon at the U.S. Press Club in Washington, D.C., this week U.S. Department of Energy Secretary Ernest Moniz said the country has more than doubled the amount of wind and solar electricity over the last five years and “we see a doubling of that again in the next five years.” 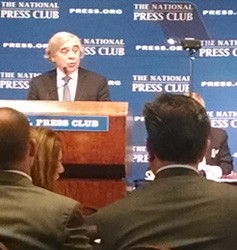 In the prior week, Moniz was on hand in California for the opening of the Ivanpah Solar Energy System in California.

“It is the world’s largest solar concentrating power system. It received a $1.6 billion loan guarantee from the Department of Energy (DOE),” he said.

“The Ivanpah project is a remarkable feat of innovation in engineering. It has over 300,000 mirrors the size of garage doors reflecting the sun’s energy and three massive towers where water is heated and converted into steam and spinning turbines,” Moniz explains.

The plant produces almost 400,000 megawatts of power, which can serve up to 100,000 homes. Most of the power will be sold under long-term purchase agreements to Pacific Gas & Electric and Southern California Edison Co. The project is a joint effort by NRG, Google and BrightSource Energy, according to the DOE. Bechtel was the engineering, procurement and construction contractor.

“Ivanpah has demonstrated to the private sector that this technology is feasible on a scale not see before,” Moniz says. “It opens up, as well, an export market for this technology.”

He went on to point out the DOE has had “large success in photovoltaic technology.”

“Last year was a banner year for solar—2.3 gigawatts of solar were installed in the U.S. in 2013,” Moniz said.