“Remodelers are looking for energy efficiency and practicality.” Those were the words of Kathy Krafka-Harkema, Pella spokesperson, who was on-hand at the Remodeling Show in Baltimore last week. Many companies were promoting their energy-efficient windows for remodelers hoping to win business from last-minute tax-credit seekers.

The company’s booth was a popular one, as it photographed remodelers who stopped by making a slam-dunk while wearing a Pella jersey.

“We’re excited to be here,” added Krafka-Harkema. “We’ve talked with many optimistic remodelers.”

Pella was promoting its Pro Expos during the event, which in 2011 will be held at college basketball arenas across the United States. 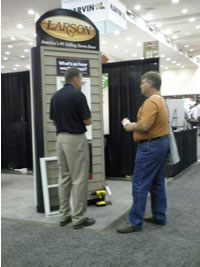 Andersen Windows was promoting its exterior trim system designed to work with the Andersen A-Series, 400 Series and 200 Series product lines. The trim is available in 11 colors, according to company representative Stacy Einck, and was designed to be easy to install in as little as six minutes. It’s made of the company’s Fibrex® material.

“Our revolutionary snap-on feature lets you trim out an average house in about half a day, compared to two days using traditional trim,” adds Mark Pominville, marketing manager at Andersen.

Larson Doors was promoting its Proframe™ installation system, a patented window sub-frame system designed to work with other vinyl replacement windows. According to the company, using the frame is a fast and economical way to replace rotted window frames, and the system is designed to be low-maintenance. It is made from extruded aluminum available in multiple colors and trim options.

The company also has introduced its inside storm door, which actually is installed inside an entry door.

“It’s a niche market,” said company representative Jim Farmer, who advised the product often is popular in historic locations in an effort not to disturb the existing entry.

Royal Mouldings was on-hand with its Royal S4S Trimboard, designed with a smooth, 4-sided finish and Stay Clean™ edges. The trimboard comes ready to install and is paintable. It’s made from cellular vinyl PVC and is available in three standard thicknesses, five standard widths, and both standard 18-foot lengths and custom lengths.

The trimboard also requires no mitering, according to company representative Bob Finn.

“[Remodelers] are really concerned about the R-ratings now,” said Scalzott. 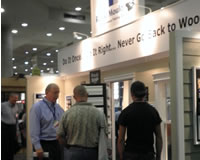 He said attendees also were particularly interested in the finishes available for Vytex products.

At a show where many seemed optimistic and many remodelers were on-hand, Lincoln Windows featured its Revitalize Series of replacement patio doors and windows, with a special focus on the Lincoln Fit Double-Hung insert window.

The product was designed so that, rather than pulling out a complete window system to replace it, the Lincoln Fit can be installed from the interior or exterior of a home with minimal disruption to the existing frame and trim. The window is available in custom sizes, “ensuring a perfect fit for the opening,” according to information from the company.