EDTM Celebrates 25 Years in the Industry 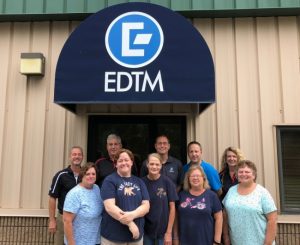 When Mark Imbrock and Jeff Simpson started Electronic Design to Market Inc. (EDTM) in 1993, they were beginning to fill a void within the glass industry. EDTM makes glass testing meters that measure glass thickness, low-E coatings and more. The company launched one of its first glass check meters around 1996.

“It was quite a task to get it up and running and launched … just for us to be able to get that out there for a company to measure glass thickness and tell where low-E coatings were … all these things the industry didn’t even know they needed yet,” says Imbrock, vice president. “It was a lot of foresight and looking ahead at things that we could see the industry didn’t have. There was no company like us; it was an untapped market.”

He says that the team identified needs within the industry early on that no one was developing solutions for at the time. Now customers come to EDTM with their needs and the company can develop solutions.

“We’ve gotten even better at filtering customer requests. We always tell our customers, ‘These product ideas come from you.’ Most all of them have. I’d like to tell you I sit here behind a desk and come up with these ideas by myself, but that’s really not how it works,” says Imbrock. “It’s usually from having dialogue with somebody. We’ve gotten better at filtering those so if we do go into development on a product there’s a pay day at the end of the day.”

EDTM has grown since 1993. The company bought a new building in 2005, giving it room to grow. The decision helped the company weather the recession.

“I can remember moving in and thinking we’ll never fill up 16,000 square feet. It only took a couple of years and I thought, ‘Wow, that didn’t take long at all!’ It was a big leap of faith to jump into a building at that point in time,” says Imbrock. “Thankfully, things went as well as they did going into the recession. We had ourselves in a great position having our own building and being pretty much debt free by the time the recession started.”

“Labor can become a major issue so automation has been a great help,” he says.

Imbrock credits EDTM’s employees with helping the company be successful throughout the last 25 years.

“Our employees are a phenomenal group. We didn’t get to 25 years just because Jeff and I pushed it. We made it because of who we have on our team,” he says. “We have extremely low turnover. We don’t lose people. Once they start they’re usually here for quite a duration. We have some employees who have been here since 1997. They take ownership in what we do and take the quality of the product personally.”

Going forward, the company is focusing on social media, which it didn’t do in the past. Another new area for the company is branding. While EDTM is developing complex technical products, it recently released low-E cards, which can be customized to include any company’s information and branding.

One of the company’s initial challenges was getting its name out there.

“Since it’s a niche market you can’t just go out there and blast the local airwaves,” says Imbrock. “We really had to go out with a fine-toothed comb to find our customers.”

Since it opened in 1993, EDTM’s products have been used on the Empire State Building and the U.S. Capitol Building, according to Imbrock.

As he and Simpson continue, they will begin planning the transition to new ownership.

“We spent the better part of our lives getting this merry-go-round spinning as fast as we can and the dialogue starts happening at this point in life where you start saying, ‘We got it spinning, how do we jump off of this thing?’ How does the company transition years down the road from now? We’ve got to start setting those things in place now,” says Imbrock.