Driven by Emotion, McCrary-Tokes Finds Success in Life and Business 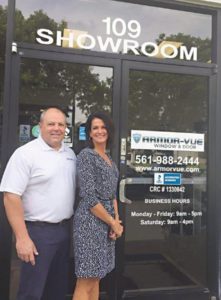 Love isn’t a word you often expect to be associated with business or politics. But from the impact-rated window company she’s helped to make successful, to the lives she’s changed through legislative initiatives, Lisa McCrary-Tokes says that’s what’s driven her. As chief marketing director of Armorvue Window and Door, McCrary-Tokes was recently awarded the Sun Sentinel’s Excalibur Award for her leadership across business and community. Following the tragic loss of her eldest daughter, who was taken by murder, McCrary-Tokes and her husband Toby, Armorvue’s president, began petitioning for improved legislation in Ohio that would prevent similar incidents—all while working to build the success of their business. Meanwhile, as they worked to succeed across both fronts, the couple managed to establish the Reagan Delaney Tokes Memorial Foundation—an initiative that’s provided approximately $200,000 in scholarships, McCrary-Tokes says.

An Ohio native, she had a very different career path before transitioning into the world of doors and windows, including a stint in the cosmetic industry, while her husband worked at Champion Windows. But when Champion sold to a private equity firm, McCrary-Tokes says her husband decided to open his own business.

“We had always said we would eventually end up in Florida, as a permanent situation, but it just came about a little sooner than we had anticipated,” she says.

In 2013, Armorvue opened its first location in Boca Raton, Fla. The company focuses on replacing impact residential doors and windows, while its operation in Toledo, Ohio, includes roofing, siding and sunrooms. In 2018, they opened a Toledo location, and in January 2019 expanded within the Florida market with offices in Sarasota, Orlando and Tampa. McCrary-Tokes said Armorvue was able to expedite the expansion process because they copied the same internal operating structure from their original location.

These days, the company employs between 40 and 45 people across its five locations.

“We really believe in providing a full-service opportunity for our customer,” McCrary-Tokes says. “One of our taglines is ‘From permitting to final inspection, Armorvue takes care of it all.’ We believe in creating a situation where it’s basically a one-stop shop for the customers, and that’s why we have a brick and mortar shop in every single market that we have. It gives the customer an opportunity to come into a showroom and see full-size versions of the product if they so choose.”

Amid labor shortages, the company provides benefits and training to build rapport with its employees. And it’s those relationships that McCrary-Tokes suggests allowed Armorvue to survive in the midst of tragedy.

“The fact that our company is even still in business, I think, is pretty remarkable considering what we’ve been through,” McCrary-Tokes says. “But we also knew that we had really great employees and dedicated people that wanted to grow, develop and expand, and because we had that we kept with that plan. It just got delayed a little bit.”

Intending to expand in 2017, it was family tragedy that delayed those plans. Reagan Tokes, 21, was killed near the campus of The Ohio State University, by a convicted sex offender who had just recently been released from prison, despite the fact that his violent behavior continued while incarcerated, McCrary-Tokes says.

“We had to depend on our employees to stay the course of what they had been taught and what they knew the company standards to be and try to hold all that in place in our absence,” she says. “That was pretty tricky, especially for us. At one point you’re not even sure if you can get out of bed let alone continue to run a company.”

The couple worked with state officials in Ohio to revise what they saw as flawed legislation, McCrary-Tokes says. Last December, part of the Reagan Tokes Act was signed into law, allowing for time to be added to a prisoner’s sentence while they’re incarcerated. Meanwhile, the second phase of the bill was introduced in both the Ohio Senate and House of Representatives, with proponent hearings and no objections. At press time, neither had advanced the bill by vote (required before it can be presented for signature by the state governor in order to become law).  If approved, the new law will require ankle monitors to be monitored in real-time, while reducing the caseloads of parole officers—laws that, if they were in place, may have saved her daughter’s life, she suggests.

“Even though it was incredibly difficult and we were in the throes of trying to figure out how to function and move forward, we knew we had to do something,” she said.

While she’s honored to receive the Excalibur Award for her positive impact to her business and community, she says she credits her success to the people around her, along with the “faith and love being at the foundation of what is motivating us to do it.”