Door and Window Companies Commemorate Veterans Day—Some With Donations, Others With Jobs

With around 19 million veterans in the U.S., door and window companies pause each year to commemorate their service—some through jobs and skill-building programs, commemorative activities or donations. Others choose to lend a helping hand. Officials for Window World say their company regularly volunteers its corporate jet for Veterans Airlift Command, which provides free air transportation to post 9/11 combat wounded individuals and their families, for medical and other purposes. Menzner Hardwoods got an early jump on the occasion by theming its booth at the recent World Millwork Alliance convention “Made in the U.S.A. – Honoring Our Veterans.” Along with a red, white and blue design, “We featured pictures of employees of Menzner Hardwoods who are military veterans, on the backdrop,” says Mikkalyn Hafner, marketing specialist.

At Masonite, a pilot internship program known as Skillbridge offers members of the military who are within 180 days of completing their service internship positions, through which they receive on-the-job training and hands-on experience. Employees who are also veterans serve as mentors. Since the program’s inception, in July 2021, 75% of participants have been hired full-time, officials say.

The COVID-19 pandemic has changed the way some companies commemorate Veterans Day, but it hasn’t held them back from doing the right thing, officials say. At Veka, they switched from homemade meals to an online campaign for raising donations. The company used to host honorary lunches for veteran employees, with food prepared and served by fellow teammates, and shirts and hats. This year, the company is using FundtheFirst.com to solicit donations for first responders, including military and medical. 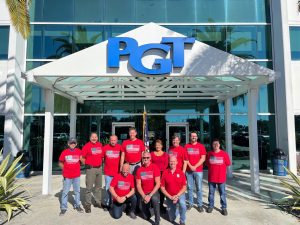 Earlier this year, commemorative shirts showed up at PGT Innovations, prompting the company’s leadership to get in on the action. “A number of our folks are veterans, and we noticed that many of them had started participating in the RED Shirt Friday movement individually by wearing their own red shirts,” says Jeff Jackson, president and CEO. The company employs more than 100 veterans across its family of brands, officials say, and followed suit by designing its own company-branded t-shirts for the Remember Everyone Deployed (RED) initiative. Employees purchase and wear shirts for RED Shirt Fridays, to show respect, remembrance, and support for deployed troops.

“We felt the best way to support the RED cause and our team of veterans was to give back to organizations that are there to assist our soldiers when they return from being deployed,” Jackson says. “Our PGTI team members embrace the principle that we are stronger together, and we wear our branded RED shirt to show that we are united in our recognition, support, and appreciation of these brave men and women.”

Over the past several months, team members from the company’s plants and office locations purchased 958 shirts, raising a total of $4,790. The company then matched that amount and donated $8,100 to Operation Warrior Resolution, a veteran-run nonprofit in Sarasota, Fla., which serves as a leader in holistic mental health care for veterans and families. Another $1,480 went to the Wounded Warrior Project, a nonprofit that helps veterans and active-duty service members.

Larson Manufacturing is tying Veterans Day in with the holidays, by partnering with Wreaths Across America. Each December, the program coordinates wreath-laying ceremonies at Arlington National Cemetery, as well as at more than 2,700 additional locations, depending on citizens and businesses to donate resources for handcrafted all-American balsam wreaths.

Through the company’s “Wreath of Honor” initiative, Larson encourages homeowners to submit photos of their storm or screen doors with wreaths. For every submission received, the company sponsors one Wreaths Across America wreath, up to 2,500.

“By partnering with Wreaths Across America, LARSON is honoring the men and women who serve our country, past and present, including our veteran employees and their families,” says Jeff Rief, president. For every wreath photo submission we receive, we will sponsor one Wreaths Across America wreath that will be laid at veterans’ cemeteries on December 18. “One of our trucking associates is even going to deliver wreaths to cemeteries throughout the Midwest!” says Amanda Bechen, the company’s digital marketing manager.

The staff at [DWM] magazine thank U.S. veterans for their service to our country.