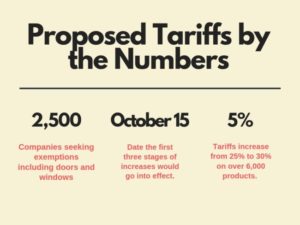 Many U.S. companies are bracing for the impact that tariff increases on over $500-billion-worth of Chinese imports will have on their businesses. The door and window market is among the list of industries that are expecting to be significantly affected.

As October 15 approaches, the date that the first three stages of increases are set to take effect, organizations and companies in the door and window industry are fighting for exclusions on products that will lessen the blow.

According to an article from the Wall Street Journal (WSJ), Prime-Line Products, a Redlands, Calif., maker of hardware for doors and windows is among 2,500 companies seeking exclusions on about 31,000 products. Prime-Line alone accounted for 1,400 of those requests asking for exclusions on items such as brackets, guides, handles and wheels according to the article.

At the time of the WSJ article’s publication, the Office of the U.S. Trade Representative (USTR) had only ruled on 1% of the total filings for exclusions granting only 61 exclusions.

Prime-Line did not respond by press time to [DWM]’s request for comment on the status of the company’s exclusion requests.

The Window and Door Manufacturers Association (WDMA) is one such organization taking action for the door and window industry by engaging with USTR, something they have been doing for the past couple years ever since rumors of tariff increases began.

WDMA director of government affairs Kevin McKenney said they are confident in their current efforts to exclude over 60 products from the Stage 3 list of products totaling 5,733 U.S. imports that will see an increased rate from 25% to 30%. He says this confidence in part comes from WDMA’s previous success in achieving exclusions for products related to door and window manufacturing on the first stage list that totaled 818 imports.

“We are definitely going to be heard and seen by USTR,” McKenney says. “What the big open question is going to be is how generous they are going to be in providing product exclusions from the tariffs. So far, they have been very frugal with granting exclusions.”

But McKenney says that WDMA is continuing to make the case that this is a major concern for the manufacturers the association represents, businesses both small and large.

“We’ve been hearing similar feedback from both larger businesses and smaller ones, this is something that is just affecting the industry across the board,” McKenney says.

The most recent action WDMA took was submitting a letter on September 20 opposing the percentage increase on the Stage 3 list.

But in spite all their efforts, McKenney says it is a waiting game. And at the moment, the hope is that negotiations with the Chinese government will convince President Trump to roll back the increases.

“Everyone is in kind of a wait and see position,” says McKenney.