The U.S. Department of Justice (DOJ) issued an argument on Monday against Jeld-Wen’s appeal in an ongoing legal battle between two doormakers, urging the 4th Circuit Court of Appeals not to accept Jeld-Wen’s argument. 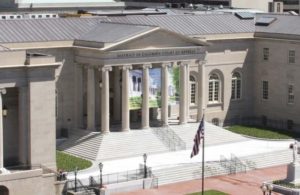 DOJ argues against the Jeld-Wen appeal.

Jeld-Wen has been scrambling to gain a win in an antitrust lawsuit issued by door skin manufacturer Steves and Sons Inc. (Steves) that has been unfolding since 2016.

After a jury verdict ruled in Steves’ favor granting them close to $174 million in damages and ultimately requiring Jeld-Wen to divest its Towanda, Pa.-based manufacturing plant, Jeld-Wen filed an appeal on April 12, 2019. The appeal argued that “laches should not be uniformly applied to block private-party divestiture suits filed after the consummation of a merger or acquisition.” (More on the appeal here.)

Judge Payne said that the Texas court claim was nearly identical to the trade-secrets case his court in Virginia had already ruled on. Jeld-Wen was enjoined from re-litigating its claims in Texas, taking yet another loss. (More on this here.)

Once again, Jeld-Wen’s attempts are being cut short as the DOJ argues in favor of Steves in the amicus brief issued this week.

“Jeld-Wen wrongly urges this Court to adopt a rigid approach to laches and overturn the district court’s conclusion that laches does not bar Steves’s divestiture claim,” the brief states.

However, the DOJ wanted to be clear that “no inference should be drawn from the Antitrust Division’s decision to close an investigation into a merger or acquisition without taking additional action.”

The DOJ had already investigated the shakey agreement between Jeld-Wen and Steves once in 2012, due to Jeld-Wen’s acquisition of Craftmaster Manufacturing Inc. (CMI) after signing a partnership with Steves.

The DOJ closed the investigation the same year only to reopen in 2014 after Jeld-Wen requested a price increase that was not permitted in the contract with Steves leading to Jeld-Wen’s announcement to terminate the agreement per the contract terms.

Shortly after the DOJ closed the investigation again, Steves’ antitrust lawsuit was filed.