Are we heading into a recession? That was the question on many people’s minds at the 81st Annual Dodge Construction Outlook Conference in Chicago, as economic growth begins to slow. The answer is that a recession is not likely within the next 12 months, according to two economists, but a slowdown is headed for the door and window industries via decreases in construction. 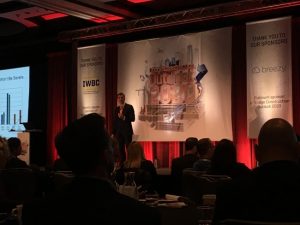 Dodge Data & Analytics released its 2020 Dodge Construction Outlook report at the conference, which predicts that total U.S. construction starts will slip to $776 billion next year, a 4% decline from the 2019 estimated level of activity at $808.7 billion. Commercial, multifamily and single-family construction starts are all expected to fall back next year while the institutional segment is expected to remain the same.

Dodge chief economist Richard Branch pointed out that after a recession there is usually strong growth in single-family housing; however, that segment didn’t see growth until 2013 following the last recession. He explained that during the first few years of economic recovery after the Great Recession, housing prices rose, making homeownership less affordable. Many people chose to purchase condos or rent, instead. The high for single-family starts landed at 833,000 units in 2018. This was almost half the pre-recession peak of 1.6 million units in 2005 (albeit, generated by what experts agree was an overinflated market).

Branch said that one issue holding back starts is the lack of single-family homes that Millennials can afford to buy. Margins for homes at the entry-level are thin, making it difficult to build while remaining profitable.

“That’s what is holding this market back. It’s not the demand but the supply side,” said Branch.

Christian deRitis, deputy chief economist with Moody’s Analytics, gave an overview of the overall U.S. economic outlook heading into next year. According to his probability model, a recession isn’t likely within the next 12 months. He said that, while financial variables such as the stock market, yield curve and futures are providing a more negative economic outlook, economic variables such as the labor market and housing, which he says correlate more closely with previous recessions, are more positive.

“There’s no need to panic right now, certainly. The data isn’t suggesting that things are falling apart but there is elevated risk. A recession in the next 12 months is highly unlikely so rest easier in the short term,” said deRitis.

He pointed out that many business investments have been stalled due to uncertainties over trade and Brexit; however, consumers have kept the economy going with a 2% growth rate.

“The labor market has been a driver of that consumer confidence. If the job market is strong they will feel confident and spend,” he said. “We have more job openings than people looking for work.”

deRitis said tariffs, a stock market correction and a leveraged loan meltdown are the current major threats to the economy. When a recession eventually does arrive, he expects it to be short and not severe. His model doesn’t incorporate policy, which is unpredictable and could impact the economy, he said. deRitis also said that with recessions come opportunities, leading him to recommend that attendees get ready to take advantage.