School security was a major focus at last week’s DHI Connextions conference and trade show in Baltimore, underlined by a powerful keynote address from the mother of a child killed at Sandy Hook Elementary School in 2012. 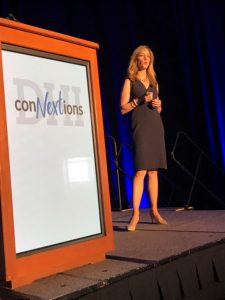 Michele Gay speaks at the DHI Connextions conference in Baltimore on May 9. Her daughter, Josephine, was killed during the Sandy Hook Elementary School shooting in 2012.

Michele Gay, the co-founder and executive director of Safe and Sound Schools, used a soothing voice and calm stage presence to lay out a harrowing blow-by-blow account of the Sandy Hook shooting, in which a mentally disturbed young man blasted through locked floor-to-ceiling glass entry doors with a semi-automatic rifle, then murdered 20 young children and six adult staff members before killing himself. One of the slain students was Gay’s daughter, Josephine.

In her presentation, Gay pointed out places inside Sandy Hook Elementary School where glass and door technology failed to protect students and teachers.

“The ability to quickly and simply lock a classroom door could have changed the outcome of the day exponentially,” she said. “I share these things because I believe that because you walked through this with me, you have information to do something better. You have the power to learn and change and better inform how we prepare our most precious people for crises.”

Wrapping up, she urged door and hardware professionals to continue their work to prevent these tragedies.

“This is a room full of problem solvers and innovators,” she said. “Use your gifts and talents to be a part of the solution.”

A visibly moved Jerry Heppes, the CEO of the Door and Hardware Institute, followed Gay at the podium and promised that his industry would do everything it could to make schools safer.

“We will answer the call that you asked,” he said. “Through improved products, through stronger standards, through advocating on school projects to incorporate solutions that match budgets when we can’t get the funding.”

Another speaker, Mark Lineberger, an electronic sales engineer with Allegion, gave a presentation earlier in the day on school security strategies with an emphasis on ensuring that life safety codes are followed.

“I can’t drive home how important code compliance is,” he said.

Lineberger said life safety codes were set up in response to tragedies such as the Triangle Shirtwaist Factory fire in New York City in 1911, in which 146 garment workers, mostly women, died because locked stairwell doors prevented their escape.

Those codes have evolved to deal with new threats. For example, in the 2018 International Building Code, updated language provides specific requirements that aim to keep intruders from entering rooms in schools.

Lineberger also discussed new locking technologies, such as remote lockdown via a fob or remote device. However, he urged attendees to be careful when modifying existing openings with untested or non-compliant devices, because they can have unintended consequences and expose students and staff to new risks and liabilities.

DHI Connextions featured a trade show with about 90 exhibitors focused on the commercial market. Most said the event was a success.

“This show right now looks better than it has in a long time,” said Jeff Graveline, a field sales consultant with Accurate Lock and Hardware. “We’re here in the Northeast market this year. We were in Phoenix last year and it felt like it was half the size of this.”

“There are a lot of electronics in the multifamily end,” said the company’s Dave Dezio.

Assa Abloy also showed off a full range of products, including new sustainable openings  that require just a thousandth of an amp to run, said the company’s Dave Moncure.

Assa Abloy also had “intelligent keys” that put the chip in the bow of the key and a chip in the cylinder, so there’s no need for the cuts on a key.

SDC showed off an electrified lock set that’s motor-driven instead of dependent on a solenoid, said Mary Hester, a regional sales manager with the company.

ODL’s popular Blink blinds-between-glass product has been a big seller on the residential side for a few years, and it’s also made big gains in the multifamily segment, said Jim Rohnkohl, the company’s director of sales and marketing for commercial and multifamily. Now it’s branching out into the commercial market.

“We want to be in the architectural community, and we want to really work to grow our business,” he said. “In educational facilities, when you get into lockdown situations where you’re supposed to close off vision into a classroom if you have an active shooter, you don’t want them to be able to see into the classroom. This type of application would be perfect. This also works well in hospital and detention facilities.”