Despite the Circumstances: Attendees and Exhibitors at GlassBuild Show Determination 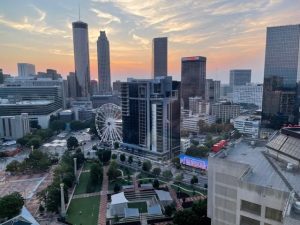 GlassBuild returned to Atlanta in 2021.

The show must go on. That was the attitude of exhibitors at GlassBuild America in its opening day, dawning their masks and returning to business as usual in Atlanta. The event was preceded by an air of skepticism, some said, but it managed to deliver on its opening day, despite an ongoing pandemic.

Not everyone who planned to showed up for the event.

“A handful of the people who were supposed to come [for our company] ended up not coming,” said Paul Fragola, technical sales representative, Industrial Products Group, for Tremco. But those absences and cancellations among some exhibitors left others with “prime real estate,” they said. After waiting more than a year to debut new products in person, the opportunity was “better late than never,” suggested Marco Patterman, a representative for Continental.

Among those choosing to venture out despite upticks in COVID-19, many said they were elated to be back together, including Laura Murador, president of Techno Rubber Industries. “I love working with people,” Murador said. At the same time, “I had to learn to put my hands in my pockets,” she added. 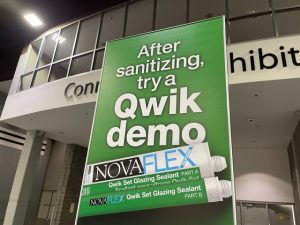 Not all the companies who registered for GBA attended, but the absences created “prime real estate” for their neighboring booths.

Ahead of the show’s opening, 10 a.m. Monday, some exhibitors said they worried that the event might fail to draw enough attendance to make it worthwhile. But, “The attendance has been better than I expected it to be,” said Roger Finch, senior customer experience manager, RAO channel, for ODL Inc. With adjacent companies backing out, ODL was one of numerous companies arriving to the show only to find they had “better real estate,” exposed to center aisles or main entryways that would have otherwise been blocked by other exhibitors.

“We talked to [show officials] about getting on a main isle [ahead of the show], but couldn’t,” said Jeff Francis, executive vice president for Argon Filling Systems. “Then we got here and said, ‘Well, it looks like we’ll be on the center isle after all, or at least visible from it,” he added. “We’re front row now,” said Rich Brevik, the company’s owner and founder.

With fewer exhibitors, but enough attendees to go around, the show appears diminished from a macro level; but those differences can be hard to spot from the show floor, where exhibitors say they’re happy with the amount of “booth traffic.”

“I was really glad to see the show back up,” Finch said, who is set to retire in March of 2022. “I was quite concerned.” In his final attendance and with a bit of added exposure, ODL aims to draw attention to its new blinds between glass for 7/8-inch insulating glass and doors up to 8 feet tall or 18 sq. ft. in size.

Others are at the show to promote solutions for issues such as supply chain challenges and labor. 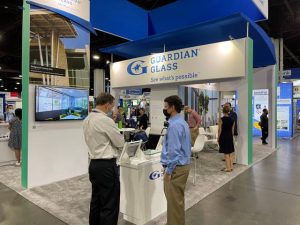 Foot traffic on the trade show floor was enough to make exhibitors feel the trip was worth it.

Nearby, Winpro had its Screen Express machine cycling, demonstrating how one operator can load screen frames and have the machine apply spline and screen automatically. By scanning a bar code on a screen’s frame, “You can load the frame and actually turn away, while it does everything,” said Ryan Smolik, one of the company’s service technicians. As companies struggle to find and train employees, “There’s a lot less skill involved this way,” Smolik suggested, while watching the machine cycle. “This is a skill someone would have to learn … the machine eliminates that,” he said.

After taking a year off following last year’s cancellation, the opportunity brought a sigh of relief for many, especially after noting the acceptable attendance. “It started at 10 a.m. and everyone was here,” said Christian Brown, sales director for Bromer.

After a year and half of waiting, “I was stoked to travel again,” he added. Arriving from Canada, Brown had to undergo testing for COVID-19 prior to departure. After GlassBuild, he and others from his company will have to be retested in order to make the return trips, he said, at an added cost of around $175 each. It’s money well spent, Brown suggested, adding, “I was stoked to travel again,” despite the circumstances.