Ken Gronbach, the keynote speaker for the American Architectural Manufacturers Association (AAMA) fall conference, wants you to stop worrying about the future. Or at least, not worry so much. 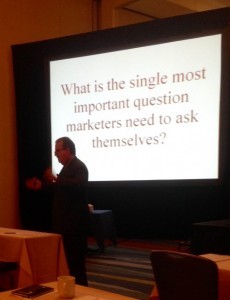 Gronbach, a demographer, futurist and author who writes about how countries’ age curves interact to create opportunities and challenges today and in the future,  spoke about his research and work on Monday.

His presentation “Simple Math: The Open Secret of the Demographic World” explored how waves of generations redetermine our fortunes and futures. He examined the complex ways that America’s Baby Boomers, Generation X, Generation Y —  and other generations in other countries — interact to shape the world’s societies. He also talked about what the future will bring for people, profits and the planet.

“There’s no middle class? Actually, there’s no middle age!” he said, pointing out that there’s a gap in U.S. demographics from 31 to 50 years old caused by the relatively smaller size of Generation X.

He also emphasized how demographics can help you understand your customer base. Generation Y, or those born from 1985-2004, is bigger than the Boomers, who total about 86 million, said Gronbach.

He advised companies to take advantage of the Boomers’ knowledge base while they still can. “Don’t let Boomers retire along with all their knowledge,” Gronbach said. “Encourage them to pass it on to younger employees.”

Gronbach also predicted that an estimated 25 million housing units will be needed as the largest U.S. generation ever begins to marry, have kids and need housing.

Globally, it’s not entirely a rosy future, Gronbach says. Russia, China, Europe and much of Asia will face falling populations because of lower birth rates, which could produce economic hardship and political instability across those regions. He also sees Africa as the world’s next major market.

However, he predicts that because of its openness to immigration, the U.S. will continue to attract the best and the brightest from around the globe, which should help the country remain the world’s leading economy.