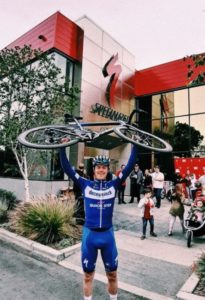 While door and window system manufacturing and cycling may seemingly have nothing in common, Deceuninck North America president and CEO Filip Geeraert begs to differ. Just four months after announcing its intent, Deceuninck became the official sponsor for a World Tour cycling team. Employees from Deceuninck North America traveled to California earlier this month for the country’s only World Tour race. While there, Geeraert said the company’s employees provided its local customer group an unforgettable experience. Meanwhile, the success of the team’s cyclists gave the company immense visibility worldwide.

The team was established in 2003 and is comprised of 25 riders who compete in World Tour races across the globe. It’s that exposure, Geeraert said, that drew Deceuninck executives to the opportunity.

“We are delighted with this powerful partnership in international cycling, one of the most popular sports in Europe and emerging worldwide,” said Francis Van Eeckhout, CEO of Deceuninck Group, during the sponsorship announcement. “This high-valued sponsorship offers plenty of commercial opportunities for Deceuninck and all our customers. I am confident this is a new milestone for the company.”

Headquartered in Belgium, Deceuninck serves over 90 countries worldwide. In 1969, the company opened its North American-based operation, where employees design and manufacture window profiles.

Geeraert said he was apprehensive about how the sponsorship would impact business, since Deceuninck North America is a business-to-business manufacturer, but, “Having been there last week, I’m really confident that we can create a customer experience that will last for a lifetime,” he said.

Deceuninck North America western regional sales manager Dave Pirwitz was one of four employees who participated in race activities. While at the race, Pirwitz said the company hosted customers from Altera Windows and Doors, Katerra, Panoramic Doors, Champion Windows and NewSouth Group. The company and its guests had access to the riders before and after the event, an opportunity to follow cyclists in a team car and seats near the finish line, as well as in press conferences.

“We were able to provide our guests a very unique and first-class experience traveling along with the team,” Pirwitz said. “We weren’t just attendees in the race, we were almost participants in that we drove in a team car, followed along with the group of riders and we had a lot of backstage access.”

As the team travels internationally, Geeraert said Deceuninck will have the opportunity to offer other customers additional experiences.

The Tour of California is a seven-stage race that lasts a week and totals more than 770 miles. During the race, three cyclists from the Deceuninck Quick-Step won three consecutive stages.

“There were a lot of podium interviews and exposure of the Deceuninck Quick-Step team, which means Deceuninck was visible and the experience for the customers was unheard of,” Geeraert said. “It really fits in our strategy, not only at Deceuninck, but also Deceuninck North America. We want to be a game changer.”

Also known as the wolf pack, the Deceuninck Quick-Step cycling team not only offers the business exposure, but models the characteristics the company values, Pirwitz and Geeraert suggested.

“People think of cycling as an individual sport,” Pirwitz added, “but there’s a lot of teamwork to it.”

The same is true of the business world, Geeraert added.