A day after Deceuninck North America wrapped up a busy GlassBuild show in Las Vegas, the company celebrated another milestone in the Nevada desert – Saturday’s grand opening of its new plant in Fernley, about 40 miles east of Reno. 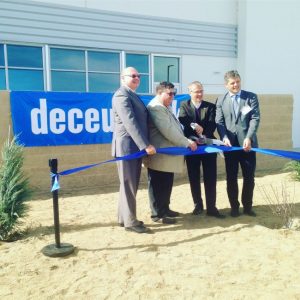 The $20 million, 150,000-square-foot facility, which sits on a 28-acre site, can accommodate up to 24 extrusion lines and includes manufacturing support, offices and a warehouse. It’s currently up and running with six extrusion lines and about 35 employees.

The plant features a streamlined manufacturing flow, from the two railroad spurs serving the location to the movement of materials through the facility and shipment of the finished product. It’s also built to accommodate future growth.

The facility was constructed in just seven months.

“Our western expansion creates the potential for significant growth and reinforces Deceuninck’s commitment to existing customers in the West and further meets the need for window systems, profiles and tools designed for the western market and climate,” said Filip Geeraert, president and CEO of Deceuninck North America, which is headquartered in Monroe, Ohio. “We are honored to celebrate the grand opening of our Fernley plant with our valued customers, fabricators, Reno-area officials and the international business community.”

Good morning, Fernley! DWM is at the grand opening of @deceuninckNA’s new faculty in Nevada.

The extrusion lines at @DeceuninckNA’s new facility in Nevada.

“America is important to us,” he said. “Our market here has experienced double-digit growth. The Fernley plant is a significant addition for the Deceuninck Group business and will enable our North American operations to more efficiently serve its western customers as the industry continues to evolve its lean manufacturing approach. In America, we’re very ambitious. This investment will not be our last investment in America, I’m pretty sure. It’s great to be here.”

And for the town of Fernley, it means more jobs – and a business that Fernley Mayor Roy Edgington Jr. called a true partner with the community.

“We’re just ecstatic,” said Edgington. “I’ve told several people here that I’d rather have ten of these companies than one Tesla,” in reference to the high-profile maker of electric cars, which has a plant near Fernley. “This is a part of the community. This is a great dream for us.”

Henri Vantieghem, the consul general of Belgium in Los Angeles, also spoke at the event. (The Deceuninck Group was founded in Belgium in 1937 and is still headquartered there.) He detailed Belgium’s long history of economic entrepreneurship, and congratulated Deceuninck on its continued growth in the U.S.