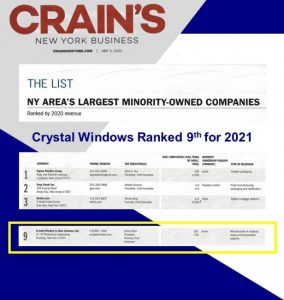 Crystal Window and Door Systems announced it has been included in the top business ranking of New York City area minority-owned firms. In its May 3, 2021 edition, Crain’s New York Business ranked Crystal Windows 9th on its list of the New York area’s largest minority-owned companies. This year’s ranking represents Crystal’s highest achievement to date with the Crain’s list, on which it has been included in the Crain’s list for the past 23 years.

The Crain’s list is comprised of the largest privately held firms that are at least 51% minority-owned and headquartered in New York City or in seven surrounding New York and New Jersey counties. The ranking is based on annual company revenues from the prior year and, while no longer annual, the list is compiled and published every few years. Others on the 2021 list include Goya Foods, Sigma Plastics, and Bartlett Dairy.

“I’m extremely proud that Crystal’s ongoing success continues to be recognized by Crain’s,” said Steve Chen, Crystal’s president. “With 20 million diverse people and tens of thousands of minority-owned companies in the New York metro area, this makes the recognition even more significant. It’s all been made possible by our dedicated employees, our great fenestration trade customers, and the appeal of our energy efficient made-in-America window products.”