On May 15, Crystal Window & Door Systems marked its 30th anniversary since opening in 1990.  The company was founded by Thomas Chen, who immigrated to the U.S. from Taiwan. It now employs over 725 workers and expanded from its original small commercial space in Queens, New York City, to five major production facilities across the country. With factories in New York, California, Pennsylvania, Missouri and Illinois, Crystal’s manufacturing footprint totals almost 1 million square feet.

In recognition of the company’s growth and its contribution to the regional economy, New York Gov. Andrew Cuomo and New York City Mayor Bill de Blasio have presented official certificates to Crystal to mark the 30th anniversary. 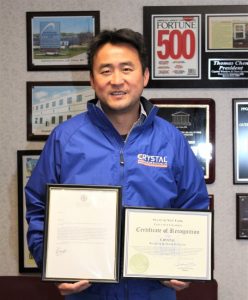 “Crystal is truly a story of perseverance, hard work and, most of all, vision,” says Steve Chen, president of Crystal Windows and son of the company’s founder. “We saw opportunities to serve the construction market with quality window products, and Crystal has certainly fulfilled that vision and beyond.”

Crystal held a major 30th anniversary corporate celebration in January of this year, with nearly 1,000 employees, their families and other guests in attendance. Additional events are planned for later this year when conditions permit.