Despite the challenges of labor shortages, Crystal Pacific Window and Door Systems, also known as Crystal California, has managed to beat the odds—more than doubling its workforce over a four-year period. Now approaching the 100-employee mark, at the end of 2018 the company’s roster had increased by nearly 80 percent over just more than a one-year period and by 113 percent over a four-year stretch. As the West Coast division for New York-based Crystal Window and Door Systems, the company has only been around for seven years, serving as a vinyl and un-plasticized polyvinyl chloride (uPVC) window manufacturer. Crystal California operates a 116,000-square-foot manufacturing facility, including a full showroom and sales office.

When asked about expansions, Bob Nyman, a spokesperson for the company, highlights growth potentials and geographic advantages.

“When Crystal bought the property in Riverside, Calif., early in 2012, economically it was fairly depressed,” Nyman says. “Property prices were low and there was an available workforce that was interested in coming in and working. We may start to see the results of a greater employment, but right now everything has gone very well with the growth of the company.” 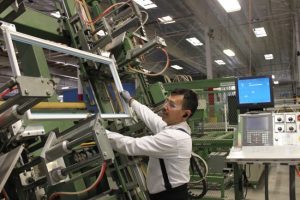 Along with the growing workforce, Nyman says Crystal California has a unique retention strategy—including bonuses for employee referrals.

“We’re very flexible in terms of arranging shifts for people. We’ve been very accommodating,” he says. “For example, we operate a Saturday shift, giving people the option [for working then] if they lose a day during the week, for whatever reason; they’re able to pick up a full week.”

In terms of location, the West Coast (in particular) has allowed the company to expand its product lines, Nyman suggests, adding to its opportunities.

“The population and marketplace allow us to introduce new products different from the ones we sell back in the East,” he explains, adding, for instance, “We’ve seen there is a growing market for replacement windows.”

“Our workforce growth is directly attributable to our enormous success introducing new products, increasing sales and expanding our presence in the marketplace,” Garcia says. “Crystal’s workforce growth exemplifies the resurgent national economy and the rebounding Riverside business community. Of course, credit also goes back to our parent company’s strategic vision seven years ago, during economically challenging times, to launch a West Coast operation here in Riverside.”