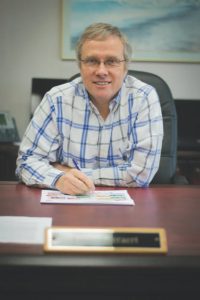 As the effects of COVID-19 upend business plans, the pandemic didn’t change the mind of Filip Geeraert for entering retirement. But hailing from an industry that leans heavily on personal relationships, the moment did arrive bitter-sweet, he admits, after postponing plans for face-to-face farewells. Ahead of announcing his plans, Geeraert says he aimed to make a final tour, of sorts, visiting 20 years’ worth of customers, but had to shelve the idea for the sake of travel and safety.

“It was nine months ago when I decided to retire, as of July 1,” he says, admitting that as the day approached things looked “a little bit different,” than what he had envisioned, due to COVID-19. “I was planning the last couple of months to travel a lot to customers, to personally say goodbyes … that didn’t happen,” he says.

As the CEO of , for two decades Geeraert wasn’t known for sitting behind an executive desk or closed doors, but instead was a steadfast figure at events and tradeshows. Known for implementing the company’s “four zeroes”—including goals for zero incidents, zero turnover, zero defects and back orders—over the course of two decades, he rearranged Deceuninck North America’s operating philosophy to be more customer oriented, he says. “We used to be very much operations oriented, and I think we have shifted that to customer orientation and created a theme that really can move mountains,” he says. “I want that to continue, because it’s the customers, in the end, who define how successful we are.”

Meanwhile, it’s the relationships behind that customer-first strategy that make retiring all the more difficult amid COVID-19.

“The last couple of weeks I can say have been, to a certain extent, emotional,” Geeaert says. “Because you re-live the 20 years and also the many interactions … a lot of the customers I call my friends. So I keep saying, ‘I’m not saying goodbye, but we will see you.’”

As Joren Knockaert joins the company as its new president and CEO, Geeaert remains involved as board chairperson, “not in the day to day, but more in the vision, the strategies, the future of this company,” he says. “He will be complimentary to what was probably my weakness, so it can only get better,” he adds. While one of Geeraert’s goals included increasing Deceuninck’s size and presence, “I can still realize it while being a chairman of the board,” he says. “So, it’s not the end, but to a certain extent still the beginning of something new … I will be able to spend more time on the future, on the vision. And that’s exciting.”

As for his farewell tour and an industry gathering to celebrate retirement, those will now happen “perhaps in 2022,” he says. “I must admit, COVID-19 did put a little bit of strain on the whole planning, but it is what it is. And I still have it to come.”

Tune in for More

Days ahead of his official retirement, Geeraert joined [DWM] as a guest on its podcast. For more insights and to listen to the full interview, CLICK HERE or search for Door and Window Discussions on Apple podcasts.