Consumers Are Spending More and More on Residential Remodeling

For remodelers, business will continue to be good in the ‘hood.

Spending on residential remodels will continue to trend upward, according to experts at a press conference hosted by the National Association of Home Builders (NAHB) Remodelers at the International Builders’ Show in Las Vegas. Professional remodelers from around the country agreed with the forecast, citing clients’ increased financial security.

NAHB projects that remodeling spending for owner-occupied single-family homes will increase 1.1 percent in 2016 over 2015, and another 1.9 percent in 2017. 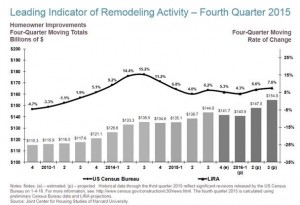 Harvard University’s LIRA projects a significant increase in remodeling spending in the next few years.

“After recent revisions, Census estimates now indicate that improvements to owner occupied housing increased at a real rate of 1.3 percent last year, which is consistent with NAHB’s expectations and our measure of remodelers’ sentiment,” said Paul Emrath, NAHB’s vice president for survey and housing policy research. “Going forward, we expect this modest growth in the market to continue, fueled in part by steady appreciation in house prices that will enable owners to tap into their home equity to fund remodeling projects.”

The trend is also projected in Harvard University’s Leading Indicator of Remodeling Activity (LIRA), though at a higher pace. The indicator projects annual spending growth for home improvements will accelerate from 4.3% in the first quarter of 2016 to 7.6% in the third quarter. By then, the level of annual spending in nominal terms is anticipated to surpass the previous peak set in 2006.

One remodeler said a greater access to credit would help remodeling investments increase even further.
“While the economic recovery has brought about a surge of remodeling activity for second homes in our market, access to credit continues to hamper the remodeling market’s full potential locally,” said Jeff Grantham, a remodeler from Petoskey, Mich. “We remodel many of these homes to make them accessible to family members of all ages.”