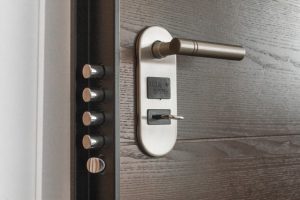 “Most break-ins are committed by criminals who come right through the front door, according to Department of Justice statistics,” says Consumer Reports (CR) author Daniel Wroclawski in an article highlighting the best and worst door locks, as tested by the magazine’s engineering team.

As a way to help consumers find the most durable locks, CR conducted tests on several dozen and provided a list of the top five picks and four “models to skip,” based on a rating system.

The kick-in test is conducted by slamming a 100 lb. steel battering ram against a locked door eight times, raising the ram higher with each repetition or until the lock fails. CR test engineer Misha Kollontai said the main cause of failure in the brute force tests was most often the short screws used to attach the strike plate, which he added is easy and not too expensive to reinforce for a significant increase in resistance.

The drill test evaluates how well a lock withstands an “attack” from a cordless drill, while the picking test assesses the internal mechanisms of the lock.

The overall results of CR’s lock testing are “unsettling,” according to the resulting Buying Guide evaluation on the publication’s website.

“Many of the deadbolt locks tested by Consumer Reports lack the level of protection you might want or expect,” reads the page. “In our labs, a few well-placed kicks or a couple of minutes under assault from a cordless drill were all it took to defeat almost every lock in our ratings.”

However, there were a few that outshone the others and CR listed these briefly, highlighting brands that made the list, such as August, Medeco, Schlage and Yale.

Organized by category these are CR’s top five picks:

CR also provided a list of the “Worst Door Locks” based on their susceptibility to picking, drilling and kick-ins. Included on that list were: