Construction Outlook: Regarding Labor, No Good News to be Found

Annual predictions surrounding housing starts and remodeling activity always include a mix of good and bad news. Perhaps remodeling activity was strong, but housing starts were stagnant. Often, economists would point to the future, even a year or two out, and have some end in sight—a sign of hope. This year, when Kermit Baker, chief economist at The American Institute of Architects (AIA), offered his outlook to those attending the Window and Door Manufacturers Association Executive Management conference, there was no good news regarding labor shortages. “It’s a long-term problem with no clear solution in sight,” he said. If you’re an employer within doors and windows or construction, you likely knew that already. 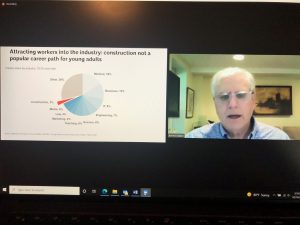 Baker had no good news to share regarding labor shortages.

Baker pointed out that overall the stock market has been strong, and mortgage rates have been stable. That isn’t the case with inflation.

“Inflation has been steadily increasing, and we are at a place we haven’t see in decades,” he said. “Inflation is pushing up the cost of construction caused by supply chain disruptions.”

The good news may be in housing starts, the previous bearer of bad news.

“Housing has come roaring back after 12-18 months,” said Baker. “We should get to 1.6 million starts this year. At that pace, home sales are fairly strong, and house prices are rising at their fastest pace in decades.”

The downside is affordability problems. “We have a fairly significant deficit in housing which is why housing prices are high,” said Baker, who pointed out that house prices have increased, on average, by 18%.

Home remodeling is continuing its steady rise as the housing stock gets older, and homeowners continue to remodel based on the new COVID-era lifestyle. For example, Baker pointed out that outdoor living spaces and office space remodels reflect current trends. Given all that activity, “the supply chain is taking a lot longer to correct than we thought,” said Baker. “It will resolve itself over the next year or two.”

What won’t end anytime soon is the labor shortage. Why is finding employees so difficult? Baker said there are a lot of reasons. “There is a mismatch between where the workers live now and where the jobs are,” he said. “Some are nervous about returning to work. Some are rethinking their career path, and there have been a surge of retirements.”
While this issue is plaguing all industries, Baker said construction is hit particularly hard, again based on a variety of factors.

“We are much more reliant on immigrants,” said Baker. “And we have had difficulty attracting women into the trades, we continue to have difficulties attracting college-educated workers and workers are getting older. Unfortunately, it is not an attractive career path for younger workers.” All of these reasons may increase adoption of labor-saving technologies such as robotics, according to Baker, but he said more needs to be done.

“I don’t see good training programs developing, and I don’t see immigration issues improving. I think the only bright light is if there is a technology fix for this,” said Baker. “I think it’s a long-term problem with no clear solutions on the horizon.”