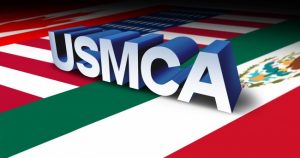 “Everybody said this was a deal that could not be done,” said the President at the ceremony. “But today, we are finally ending the NAFTA nightmare and signing into law the [USMCA].”

A few highlights of significant changes in the new deal include:

While the deal mainly addresses issues in the automobile manufacturing and agriculture industries, several organizations in the building sector have expressed their approval of the deal.

The Fenestration and Glazing Industry Alliance (FGIA) U.S. Codes and Regulatory Affairs Manager Kathy Krafka Harkema explained how the deal could impact the manufacturing industry as a whole including fenestration.

The National Association of Home Builders’ (NAHB) chairman Dean Mon said that the new deal is a victory for the entire American economy and for housing affordability.

“By adding new jobs, boosting wages for American workers, and including provisions to lower the costs of materials needed to build and repair homes, this trade pact is a positive step forward to ease America’s housing affordability challenges,” said Mon.

“This agreement is an absolute win-win for the U.S. plastics industry,” said Radoszewski. “It brings the trade relationships with our two largest trading partners into the 21st century and paves the way for growth throughout North America.”

The relationship with surrounding countries Canada and Mexico is a staple of U.S. trade, enforced director of government affairs for the Window and Door Manufacturers Association (WDMA) Kevin McKenney.

“Canada and Mexico purchase about 20% of the total value of output from U.S. manufacturers, which is more than the next ten countries combined,” McKenney said. “The USMCA provides stability to those relationships.”

Already approved by both U.S. and Mexican officials, the deal is set to take effect later this year after the Canadian government approves.

“We are counting on the Canadian legislature and Prime Minister Trudeau to approve this agreement and sign it immediately so that the USMCA can start delivering benefits to the economy of the western hemisphere and beyond,” said Radoszewski.

According to an article from Reuters, Canadian Prime Minister Justin Trudeau is urging the country’s parliament to pass the deal quickly, but opposition from the main Conservative party may delay approval until April this year.