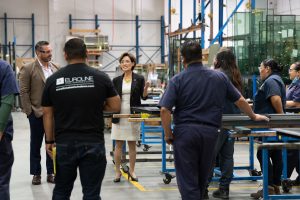 U.S. Representative Young Kim (R) of California’s 39th district recently visited Euroline Steel Windows & Doors in Yorba Linda, Calif., to learn more about the company’s commitment to the community. She is pictured here with Elyas Balta, Euroline CEO, along with a number of the facility’s staff. (Photo courtesy of Euroline)

Balta says continued commitment to the community is important, which is why once a quarter the company picks a local organization to support with its money and manpower. Most recently, Euroline focused its efforts on addressing veteran homelessness by offering time and resources to the Veterans Legal Institute.

“We’ve sponsored some of the legal institute’s events that allowed them to do some fundraising and channel the funds to helping the homeless veterans of Orange County,” Balta says.

The congresswoman heard about Euroline’s community service and decided to visit the manufacturing plant to learn more about the company. Balta jumped at the opportunity as it was another chance to increase his collaboration with others, something he recommends for all CEOs.

Balta says the congressional representative was eager to shake hands and meet with every team member on the floor. He called her message, which focused on her own efforts for the community, one of “hope.” Representative Kim was relatable, allowing team members to see the “person behind the politician,” which further increased trust and connectedness.

“Normally, it appears we don’t have anybody who cares for us in government,” Balta says, noting the representative’s visit was a nice change of pace from the mistrust and doubt in the relationship between representatives and those they represent. “It boosted the hope and morale of my team in knowing our politicians and this government are really here to serve us and help us.”

Representative Kim also had the chance to take part in the final process for products at the facility, which entails a functionality test for quality control. The entire event reinforced Balta’s belief in and commitment to collaboration as a CEO.

He calls for his peers to leverage their positions to help connect their own communities with resources, be it through relationships with politicians, or with nonprofits and other organizations.

“We’re each a beacon that can be channeled to promote hope and connection in our communities,” Balta says. “We should lead more boldly and apply our influence for this purpose.”