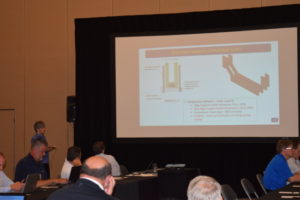 The American Architectural Manufacturers Association (AAMA) and Insulating Glass Manufacturers Alliance (IGMA) Summer Conference is taking place this week in Victoria, B.C., and early in the week the two associations covered task group updates from both organizations as well as a safety presentation.

IGMA’s Emerging Technology and Innovation Committee kicked off its session with an update on the Insulating Glass (IG) Thermal Stress Standard. IGMA technical director Bill Lingnell explained that the standard would consider different frame types, spacers and edge bites. Different configurations are being tested, and Lingnell said that 6,750 of 9,000 runs are complete. These should be complete by the July ASTM meeting.

Joanne McKinney with Administrative Management Systems (AMS), a certification administrator, provided an update on the rapid assessment chamber, which would provide a faster way to certify products than the current ASTM E2190 testing method. The project’s goal is to determine cycle parameters which would indicate relative durability of IG units (IGUs) in two to three weeks rather than in six months.

AMS has been testing different IGUs to different temperatures, pressures, UV exposure levels and humidity levels. McKinney said the next step is to move away from trial and error and to move toward a formalized research and development testing plan.

Dave Cooper, an IGMA board member and quality assurance and product technical manager at Guardian Glass, gave an update on different vacuum insulating glass (VIG) standards. He emphasized the need to create a standard for VIG to test its structural and thermal performance.

“It’s out there. It’s coming, slowly, but it’s coming … There’s an interest in it and a desire to have it for commercial and residential glazing. But there are things that need to be sorted out for test standards such as thermal and structural work. VIG isn’t going to lay dormant. It’s something we’re going to have to get ahead of.” 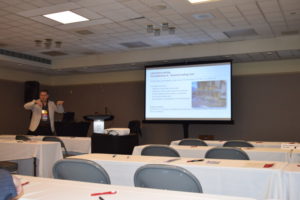 Robert Jutras, principal engineer for UL/CLEB, gave a presentation explaining the Canadian CSA A500 Building Guards Standard. One major part of the standard is that it applies not only to new construction but to guards, which include glass railings that need to be temporarily removed or replaced. Those reinstalled guards must meet the standard. 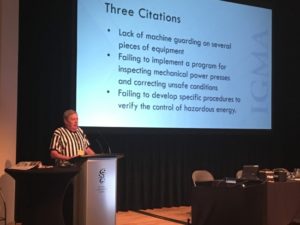 Mike Burk with Sparklike speaks about the importance of safety policies.

Sparklike North American technical representative Mike Burk gave a presentation on safety to members of both AAMA and IGMA. He went over recent fatalities, accidents and near misses, emphasizing the importance of having a plan in place when unloading glass so that no one is hurt or crushed in the process.

He also said that trips, slips and falls make up the majority of industry accidents and 15% of all accidental deaths, second only to motor vehicle accidents. He recommended that companies be on the lookout for extension cords, air hoses, garbage and other hazards that could cause someone to fall. He also suggested that companies check the bottom of their employees’ shoes to make sure they still have traction.

Burk added it’s important to have a cell phone policy in place that’s uniform for all employees. He explained that if someone is looking at their phone while on the shop floor then they’re not looking at where they’re walking or at the glass on the machine.

“Make your policy fair and even. Salaried people up front also can’t have phones on the floor if workers on the floor can’t,” he said.

Caught in/between incidents are another event Burk is bringing awareness to through his safety presentations. He emphasized the importance of not trying to catch or stop falling glass because it could hurt someone.

The joint AAMA/IGMA Summer Conference runs through Thursday, June 20. Stay tuned to dwmmag.com for continuing coverage of the event.