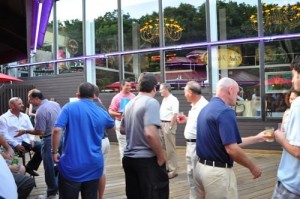 Last night those attending the NWDA’s summer meeting enjoyed a cocktail reception before the educational programs kicked off today.

Members of the Northeast Window and Door Association (NWDA) met this week in Wilkes-Barre, Pa., to network over a few rounds of golf and cocktail reception yesterday, and educational sessions this morning.

Joe Reed with Architectural Testing Inc. provided a codes report and gave some updates on the International Building Code/International Residential Code (I-Codes). Reed mentioned that the 2012 I-Codes have been implemented in Maryland, Wyoming and Missouri and he highlighted the states that have NWDA members.

“Maryland is important to a lot of people in this room,” he said. The new I-Codes are also coming soon to Pennsylvania, taking effective January 2013, and in Washington, D.C., in March 2013. Likewise, Massachusetts is adopting the 2012 International Energy Conservation Code (IECC), though it’s uncertain when it will go into effect. In Virginia it takes effect in March 2014.

He noted that in Pennsylvania the I-Codes will be called the Uniform Construction Code.

“Building officials are asking ‘how do I know this is as strong as double-pane, etc.’ and now you can point to the [ASTM E1300-09] standard.”

Some upcoming code changes include:

• Tubular daylighting devices will now be classified as skylights;

• There is clarification that allowable stress design wind pressure is to be used with window testing and glass design;

• The top of patio door thresholds must be up to 4 3/4 inches above patio or deck; and

• WOCD are required in replacement windows if they meet certain conditions.

Reed added this is “putting an aspect of renovation into the standard building code.”

Not many people in the room knew about this and that there was a six-month comment period.

Jervis said 39 companies responded to the directive including AAMA, which wants to leave it up to the manufacturer.

He thinks it will “finally be that impetus to improve installations.”

According to Jervis, EPA read all the comments and responded and said manufacturers can use any instructions they would like. He said EPA plans to consider requiring manufacturers to ship installation instructions with each product, but this is something companies could ignore.

“That’s an option as many in the industry ignored lead safe work practices,” said Jervis.

Someone asked how to know if a window is installed properly. Jervis clarified that this ends with availability of the instructions.

“It does hold the installer accountable, though, because they [can no longer say] ‘I didn’t have the instructions,” said Jervis.

Mike Collins with Jordan Knauff & Company, and a blogger for dwmmag.com, provided an update on the economic forecast for the residential and commercial door

and window industry. He said one key statistic they are watching now is job creation. ‘With the election coming up people are waiting to hire,” he said. “On the plus side, hiring is improving.”

He added, “A few years ago it was tough to find the bright spots. But now you would have to be a real pessimist to not see that things are definitely improving.”

Other optimistic news includes the fact that “plant closures have pretty much stopped,” and another positive sign is that so many companies are being purchased out of bankruptcy rather than being liquidated.

“Some companies have also said they are never going back to new construction while others say they won’t just be on that side of the fence again,” said Collins.

Throughout his presentation Collins continued to show the positive signs

“If I had to show one slide to prove things are improving this is that slide,” he said, referring to the NAHB’s Improving Markets Index. “It’s broad based and markets are improving all over the place.”

He added, “The new home supply has dropped sharply and that is great news for the industry.”

But the industry can’t ignore the fact that companies have gone out of business these past few years.

“Every one of you has competitors who have gone out of business,” said Collins. “We can still do well in a smaller market.”

He added that energy efficiency will continue to help push business forward.

“In the remodeling market the focus on energy efficiency is driving a lot of growth for windows,” said Collins.

The NWDA’s meeting concludes today. Stay tuned to www.dwmmag.com for more reports from the conference.