Coatings and Machinery on Display at Fensterbau 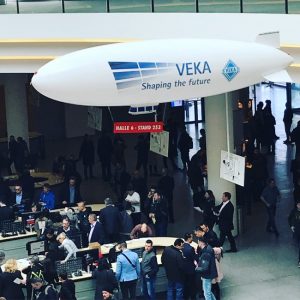 Fensterbau is taking place this week in Nuremberg, Germany, and today DWM takes a look at some of the products available from coating and machinery suppliers.

“The show was very good today,” said Michael Braeuel, president of AquaSurTech. “As always, we had a good international contingent of window and door makers interested in just-in-time colorization. We got a lot of great leads today, and we’re looking forward to a great show.”

The company, which showed off its water-borne coatings and door-processing machinery at Fensterbau, recently opened an office in the U.K. to better serve Europe.

“It’s a complex market, so we’re treading lightly,” said Braeuel. “But we’re satisfied so far with our launch in the U.K.”

At U.K.-based Regalead, there is also a big push in water-based paint, which is still relatively new for the U.S. market, reported Paul Hattrick, market manager, UPVC fabrication. He was at the trade show to tell attendees about the company’s ColorSpray Aqua OmniCoat, a two-component water-based coating designed for use on a variety of fenestration products.

PPG showed off its wood coatings, which are water-based as well.

“What we do is based on water,” said Jos Schuurmans, segment manager, wood. “Compared to other parts of the world, we are ahead in this area.”

he said the company is already looking to the next area of growth — acrylics. 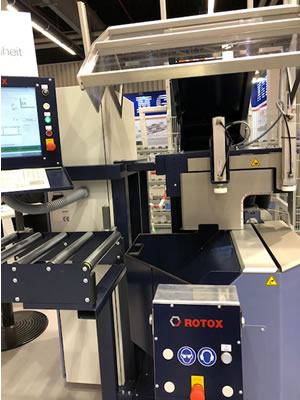 The machinery supplier also showed off its high-speed pass-thru systems.

“If you put in the wrong size, it automatically corrects,” said Joe Sigmund, president. “It can produce three frames in about 32 seconds.”

He also said the company is developing more products to use for stacking and storage.

“We’ve been packed all day,” he said.

At Forel, the focus was on profile bending and its vertical edgers.

The company showcased two of its profile benders for plastic, aluminum or steel. Zuccarello also said the company’s vertical edger “is a best seller” and can be sold standalone or inline. He described the machine’s versatility for processing a variety of glass types including laminated and tempered glass, solar panels and more.

The SBZ 141 four-axis profile machining center is the latest addition to the company’s SBZ 14x series. The machine bed is more stable and has a more ergonomic design, while the autonomous clamp positioning is also new. That allows for more efficient cycling of the machining steps, which accelerates pass-through times, according to the company. The hood and the control panel have been redesigned to make operation more efficient.

Combilift brought several examples of its popular material-handling equipment and forklifts to the show, but the company says it’ll roll out several new products when it opens a new 46,000-square-meter factory in Ireland at the end of April.

Fensterbau continues through Saturday. Stay tuned to dwmmag.com for updates.