Labor shortage, decline in workforce, trade skills gap—use whatever term you’d like, but they all amount to the same set of challenges for home building and remodeling companies. Some blame the Great Recession for thinning out workers, while others think a 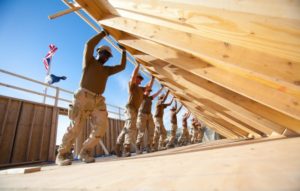 lack of emphasis on trades during schooling has left them without a viable workforce. A recent study conducted by BigRentz shows only 11% of young Americans (ages 18-24) believe trade schools could lead to high-paying jobs. And it’s those perceptions that companies in the housing market fight against, as they push for trades schools and implement their own training programs.

Of the 3,000 people surveyed earlier this year, 54% thought workers with a trade school certification made an average of $18,000 less than workers with a bachelor’s degree, and 25% thought there was a $30,000 gap. In reality, says BigRentz vice president of marketing Jim Arabia, there is an average starting pay gap of $12,000 between someone with a bachelor’s degree ($47,000) and someone with a trade school certification ($35,000). An average salary for someone in the skilled trade is $65,000, he says, while the average cost of a trade school education is $33,000, compared to an average of $127,000 for a four-year degree. People who study a trade also enter the workforce earlier and with less debt, he suggests, while also experiencing higher job security and greater access to high-paying jobs.

“I was a tech graduate from high school and went on to run one of the most successful retail window and door installation businesses in Hamilton for 42 years,” he says.

According to Bobiak, the labor shortage “began when the high schools removed all the technical trade courses and decided to convince students to go to universities or colleges.” In the meantime, while he says Mastertech Door Systems has had success hiring construction renovation students from a local college, Bobiak believes the industry needs to be reaching students earlier in the process.

“Not everyone is an academic,” he says. “They need to get the four-year technical courses back into high schools.”

For this reason, the National Association of Home Builders (NAHB) has developed Home Builders Institute (HBI), a workforce development program with a mission “to advance and provide education, career development, training and placement of men and women serving the building industry.” HBI offers resources on national and local programs that offer training and apprenticeships to everyone from high school students to veterans.

Meanwhile, Lowe’s, The Home Depot, Therma-Tru Corp. and Pella Corp. are among the companies supporting or developing their own initiatives.

Generation T is a movement launched by Lowe’s and supported by more than 60 companies and organizations, with the goal of connecting people to jobs in the skilled trades. In 2018, officials for The Home Depot announced it was committing $50 million toward training 20,000 tradespeople over the next 10 years.