Win-door North America’s third day in Toronto featured an early-morning financial talk by Warren Jestin, the chief economist for Scotiabank, who sees slow growth ahead for Canada and slightly faster growth in the U.S. 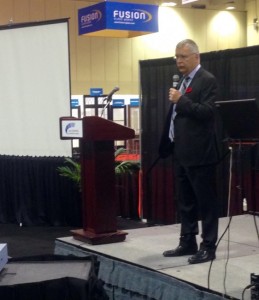 Jestin said an improving U.S. economy, particularly in housing, employment and consumer spending, means the Federal Reserve will start raising interest rates soon. He said countries outside of North America will likely do the same. That will curb growth in those nations and steer more investments to the U.S., which he repeatedly called the “bright shining star” of the global economy.

“The miracle in the U.S. is that pent-up demand has met rising consumer income,” he said. “The U.S. consumer is much better off than five years ago. The housing turnaround has helped tremendously. At the end of the day, they’re building more houses. That market is improving and likely to continue to improve.”

Jestin said the Bank of Canada won’t raise interest rates as quickly as the Federal Reserve does. He predicts that mortgage rates will increase north of the border, but not enough to affect the housing market there.

A big drag on Canada’s economy is softening global prices for commodities such as metals and wood products. Canada, a commodity-rich nation, needs higher prices for those products or it hurts the Canadian dollar, Jestin said. He noted that it’s currently worth about 76 cents compared to the U.S. dollar, and it’s not expected to go above 80 cents in the next 18 months.

Another huge factor affecting the U.S.-Canada exchange rate is the global price of oil. It’s fallen in recent years from $100 a barrel to about $46 a barrel. Jestin says that the outlook on oil prices remains hugely uncertain.

As far as the BRIC countries – Brazil, Russia, India and China – Jestin said Brazil and Russia are experiencing recessions, while India is doing well. The big question mark is China, where previously rapid growth is slowing. Jestin said that can affect the prices of forest products and many other commodities, because China is currently the biggest market in the world right now for those materials.

Win-door’s final day at the Metro Toronto Convention Centre featured companies who said they were getting positive feedback from customers. While many exhibitors DWM spoke to said that traffic was lighter than in years past, they also indicated that the quality of leads might have been higher.

Rozina Nasser of Door Components Canada (DCC), which she says is one of Canada’s biggest distributors for Masonite, said her company got some prospects from the show. Nasser said DCC is one of Canada’s top glass distributors, in addition to selling all kinds of door components. She also said the company wants to distribute in the U.S. in the near future.

“Most of our product is local,” she said. “We’re able to offer special pricing because we’re Canadian made. We do container pricing as well.”

Alain Mercier of Renotrend, a Quebec-based maker of software apps that help homeowners choose doors and windows, said his company had a great reception at Win-door.

“The show was very good,” he said. “A lot of people came in and asked questions.”

Quebec-based Novatech had one of the busiest booths at the show. It featured new steel entry doors, doorglass products and frames.

Quanex’s large booth featured its warm-edge spacer products, including Super Spacer and Super Spacer TriSeal. The company also showed off its Q-Glaze and Edgetherm sealants, as well as the Mikron C3-11300 AW-Rated System, EnergyCore, EnergyQuest and MikronWood high-performance vinyl door and window systems. Additionally, the K2 swing and sliding patio door system was on display with the new add-a-track extenders.

Show organizers said they’re still working on a date for the next Win-door show. Rick Pries of Veka Canada, who heads up the Win-door show committee, said an announcement should be made soon.

“I think we had a great year for the show,” Pries said. “We made a lot of changes that were very well received with a lot of people. Too bad some people had to miss it.”