“I’m pretty sure we’re not going to make everybody happy.” 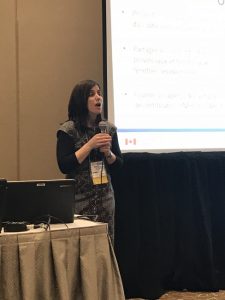 That’s how Debbie Scharf, Director of the Equipment Division of the Office of Energy Efficiency at Natural Resources Canada, described the government of Canada’s proposals for boosting energy efficiency in buildings. She spoke at an educational session during last week’s WinDoor trade show at the International Centre in Mississauga, Ontario.

The Pan-Canadian Framework on Clean Growth and Climate Change, which came out in December 2016 and seeks 30 percent of reductions in energy use through building efficiency, sets stringent goals that could mandate triple-pane windows in Canada by 2030. That huge market shift was a major concern for many in the audience.

“There are a lot of scared people out there,” said one attendee during the Q&A session. “A lot of companies are going to disappear. This is almost unachievable for the average company.”

“Are we going to take a whole lot of products off the market?”

Despite the concerns, Scharf repeatedly emphasized that nothing is set in stone yet.

“These are aspirational goals,” she said. “They are around setting a direction in the marketplace. They are directional in nature. It’s where we’d like to see the market go.”

According to Scharf, Natural Resources Canada is committed to standards that are economically and technically achievable. It’s working on market transformation strategies with provinces and territories. The regulations would be supported by consumer education through labeling.

Today, 17 percent of Canada’s greenhouse gases are generated by buildings, with heating of the interior of structures representing 56-64 percent of energy use. Windows can account for up to 35 percent of heat loss from a typical home.

According to Scharf, if Canada switched all residential windows to a U-factor of 0.8, the country could reduce national energy use by 9 percent and cut greenhouse gases by 5 metric tons.

The Pan-Canadian Framework calls for an average U-factor of 1.6 by 2020. Scharf says feedback from the industry indicates that this goal is achievable with current technology.

By 2025, it seeks a U-factor of 1.2 for windows. Scharf said that would be “a big change” for many companies, with challenges around installation, the weight of windows and cost.

By 2030, the plan demands 0.8 U-factors for windows. That effectively means triple-pane windows would be mandated in Canada, and Scharf said there are a lot of barriers to achieving that goal.

“We would need a lot of work to get there,” she said.

Additionally, there would only be one climate zone for all of Canada, as opposed to three that Natural Resources Canada currently uses under the country’s Energy Star program.

However, she said there are five barriers to success: availability, awareness, accessibility affordability and acceptance.

“We want to build a system that is the least amount of burden on industry,” Scharf said.

Natural Resources Canada recently held a research and development (R&D) workshop with 25 participants, including researchers, manufacturers and associations. A big question was figuring out the role of U-factor vs. solar heat gain coefficient in determining efficiency goals.

Other areas of discussion at the workshop included R&D into thin triples with low-e-coatings; studying window configurations, as well as integration with wall panels and flashing; improved designs to reduce thermal bridging and better understand edge performance; and a focus on insulating technologies. Scharf said there was not a major focus on dynamic windows and photovoltaics.

Canada’s government is considering adding residential windows to federal regulations, Scharf said. That would establish minimum performance standards, as well as testing, certification, labeling and reporting requirements. They would apply to all products imported into Canada, or manufactured in Canada and shipped from one province to another. They would also complement provincial regulations that cover sales within provincial borders.

The timing would be subject to stakeholder consultation and the federal regulatory process, Scharf said, adding that Canada might try to use Energy Star to achieve these goals. The specification updates are usually done every five years, and the last one came in 2015. That means the next one is due in 2020, which aligns with Natural Resources Canada’s first deadline for the Pan-Canadian Framework.

The next steps in the process to boost the standards will come through government/stakeholder workshops that will develop a windows roadmap for Canada. These will outline concrete measures to address barriers to achieving the aspirational goals of the Pan-Canadian Framework.

“The roadmap is not the end, it’s only the beginning,” Scharf said.

A national market study that lays out that roadmap, which Scharf first discussed at the Fenestration Canada meeting in Halifax, Nova Scotia in June 2017, is halfway done. It’s expected to be delivered to energy ministers next summer.