After a little more than 50 years since taking his first job in the industry, officials have announced that Bob Lang is officially retiring from Billco Manufacturing. 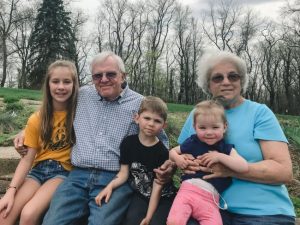 Bob Lang, his wife Cindy, and their grandchildren.

Lang spent his first two years with the company working on the shop floor, while finishing his bachelor’s degree at the University of Pittsburgh at night. He was hired as a sales assistant to the VP of sales for Billco 51 years ago, in spring of 1968.

Company officials say Lang’s peers, co-workers, suppliers and competitors provided an outpouring of well wishes and memories for his integrity, kindness of character and commitment to the glass industry. He was noted as always promoting professionalism and a Billco press release indicates that a former competitor remembers him as “a fair and honest man and his reputation and character were above reproach.” Throughout his career, Land had an insatiable appetite for research and sharing, and hosts a wealth of knowledge and expertise that one can only obtain through experience and passion, officials suggest. Even in his 53rd year, he continues to forward articles to educate and share with his co-workers and peers.

Lang says his most cherished projects at Billco include working with Hugh Trautmann on the development of what company officials say was the world’s very first “CNC/XYZ/contour glass” cutting machine, as well as its supporting software, including time he spent introducing the technology at glass shows in both the U.S. and Germany. Lang also cherishes his involvement in the development of Billco’s flat glass laminating assembly line, he says. To this day, he is very passionate about laminating and promoting Billco as one of the best in the industry, he adds.

Lang was also an early member of what was then a new group, initially called the Glass Tempering Association, which grew into Glass Association North America (GANA/NGA). It was there that Lang says he made friendships that are still active today.

Lang plans to enjoy his time with his grandchildren and his wife Cindy. He continues volunteering his time each week at the Mars, Pa., Historical Society. Lang maintains a close relationship with a few groups of friends from his younger years and also takes pride in working on an antique car and big diesel truck for fun.

He will miss all the wonderful people he worked with and became friends with over the years, he says. Lang says he is so appreciative of the trust, generosity and opportunity the Billinger family afforded him during his time at Billco.