Back to the Exhibit Floor at GlassBuild America 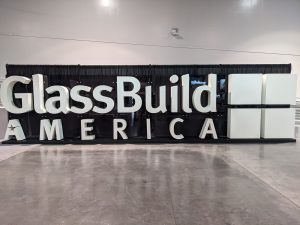 David Harris of Renolit in Michigan says his company has a new product that addresses a current problem in the industry: supply chain issues for materials in the laminate film industry.

“We reached back into our bag of tricks, so to speak, to some of the films we’ve tested and developed over time, and said ‘We have a solution to these problems,’” he says. “We have a film with no PVC, it’s all-acrylic. It solves a couple of problems right off the bat, and we call it the Exofol FPX.”

Harris says the company has sold tens of thousands of square meters of the product in only a few weeks.

“It’s not a new film,” Harris says. “People are concerned because they think it’s new and we’re throwing something out there that hasn’t been properly tested. But we don’t do that. We test everything thoroughly before release.”

Ohio’s Winpro showcased its Winpro Screen Express at the show, which Charlie Burgess says automates a process that is predominately done as a manual hand-rolling operation.

“The operator just takes a pre-assemble screen frame and lays it on the table,” Burgess says. “You tell the table what size screen you’re running, with bar code scanning or by loading it into the MMI, punch in the size and style, drag the cloth over before hitting start and it does the splining.”

Thanks to a few design changes, the machine also has built-in features that control the quality of the screen by eliminating hourglassing. Additionally, Burgess says the Express reduces repetitive motion injuries.

Chip Steele of Emmegi USA says his company now has a solution for which the industry has been asking for decades: a machine that performs all of the prep work on pre-welded door blanks.

“We just came out with this machine this year,” he says. “You put the door blank in and it’ll do all the preps. For us, this has been the showstopper.” 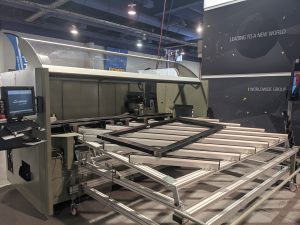 “So now, the larger companies that are getting their doors can no longer wait on suppliers,” he says. “They’re spending the money so they can do one or two doors now. Everybody has always asked for this type of equipment.”

Tony Bartorillo of Gutmann North America in Canada was highlighting a wood curtainwall system whose appeal outside of the residential market has come as a bit of a surprise.

“It’s even being used in some commercial applications, but residentially as well,” he says. “It’s a little unique because there’s not a lot of domestic manufacturers that do the wood systems. At the high-end residential market segment, I’m talking $5-$10 million single-family homes, there is a trend now of using a feature curtainwall in personal residences.”

Bartorillo says these residences have ceilings as high as 18 feet and homeowners want the views that can accompany ceilings of that height.

“But they don’t want to see aluminum because it’s a private residence,” he says. “So when you go with the wood system, you have the warmth of wood on the interior and the performance and structural integrity of aluminum on the exterior.”