As Hurricane Maria bears down on Puerto Rico today, it’s important to remember that hurricanes Harvey and Irma have left widespread devastation in Texas and Florida that’s affected fenestration-related industries in both states. Here’s a look at the biggest issues in the aftermath of the storms. 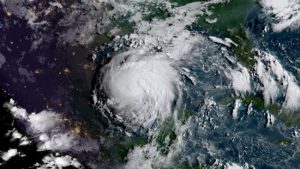 Irma hit Florida on September 10 and plowed up the state’s west coast. Its high winds pushed a devastating storm surge into many low-lying areas and knocked out power for millions. The storm then continued into Georgia, where it weakened but still caused widespread damage and electricity outages. It also affected travel for many people heading to the GlassBuild America show in Atlanta, which was held September 12-14.

Disruptions to the door and window industry were relatively minor from Hurricane Irma. Many dealers faced temporary shutdowns, and manufacturers didn’t appear to suffer too extensively. Masonite, which is headquartered in Tampa and operates its Digital Innovation Center and three manufacturing plants in Florida, as well as several plants in adjacent states that experienced severe weather conditions, announced this week that it only suffered minor disruptions to its operations. It was much the same for PGT Innovations and Doers Window Manufacturing.

On the other hand, it will probably take months to determine the degree to which building codes implemented after Hurricane Andrew ravaged South Florida in 1992 helped prevent damage, but early assessments indicate that products such as impact-resistant windows kept it from being worse than it could have been.

Last week, the Wall Street Journal reported that damage in Florida from Hurricane Irma appeared to be relatively minor considering the high winds that accompanied the storm.

“The feedback we’re hearing is positive,” Rusty Payton, chief executive of the Florida Home Builders Association, told the newspaper. “We’re all interested and there will be a deep dive. It appears that it (the new code) did its job.”

New homes in Florida are designed with cinder block masonry construction, stronger roofs, and impact-resistant doors and windows. That’s good news for  companies like PGT Innovations, a leading manufacturer of fenestration products that can be used in storm conditions. Last week, its shares hit a 52-week high.

“Impact-resistant windows and doors are a quickly expanding segment of the overall market, with sales expected to climb 7.5 percent annually over the next five years,”  said Freedonia Group analyst Carolyn Zulandt. According to Freedonia, at-risk areas might be getting a wake-up call because of the recent storm activity, and this is expected to boost investment in stronger fenestration products. Lawmakers in coastal states that have been slow to adopt stronger building codes could re-evaluate standards for doors and windows.

However, a controversial bill passed in Florida in July eliminates a requirement that the Florida Building Commission automatically adopt International Code Council (ICC) standards every three years. Instead, Florida will maintain the Florida Building Code in its latest form and choose which updates from the ICC it wants to add.

Opponents say the change could lead to in weaker building codes throughout the state, while supporters argue that it removes undue burdens for the building industry without weakening existing standards.

Hurricane Harvey hit the Gulf Coast of Texas on August 25 with 132-mph winds that destroyed many structures, but flooding caused the biggest damage by far. The storm dumped around 40 inches of rain on the Houston area.

A possible challenge for the door and window industry will be crippled production capability for vinyl, which now represents about 70 percent of the U.S. residential window market, according to research from the American Architectural Manufacturers Association.

Several plastics makers on the Gulf Coast declared force majeure after Harvey. According to the Business Dictionary, force majeure is a “standard clause found in construction and supply contracts” that “exempts the contracting parties from fulfilling their contractual obligations for causes that could not be anticipated and/or are beyond their control.”

Kevin W. McCarthy, an analyst at Vertical Research Partners, an equities research firm, told Chemical & Engineering News that the Gulf region produces about 40 percent of the vinyl in the U.S., and about 60 percent of the country’s ethylene, polyethylene and polypropylene. (Ethylene is an important component of vinyl production.) He said vinyl prices could rise in the coming weeks.

About 37 percent of U.S. capacity for manufacturing chlorine and caustic soda has been disrupted by Hurricane Harvey, according to Bloomberg Intelligence. Those chemicals also are used to make vinyl and PVC.

One damaged plant is the Arkema chemical facility in Crosby, Texas, about 25 miles northwest of Houston, which was flooded and lost power after the storm. That led to explosions, fires and a mass evacuation of residents near the plant. The facility makes organic peroxides that are used in the production of vinyl window profiles, among many other products.

Last week, the Environmental Protection Agency launched an investigation into whether safety rules were followed at the Arkema plant.