The Fensterbau Frontale 2012 trade show, which focuses on doors, windows and facades, opened today at the Exhibition Centre Nuremberg in Nuremberg, Germany, where big crowds are looking for the latest fenestration production, materials and product developments. The approximately 1,200 exhibitors on the show floor have not been disappointed, as they are planning to greet nearly 100,000 attendees at the event, which continues through March 24.

Exhibits are generally geared toward the demands of the European market, with triple-glazing products and brightly colored extrusions prevalent. Stringent energy-efficiency codes, it seems, have made triple glazing a near-standard offering in Germany.

Approximately 50 percent of the new windows sold here use triple glazing, although “it’s very diverse from country to country,” says Andy Jones of Quanex. The company is here for the first time at Fensterbau, building awareness of its product offerings and new branding, since its acquisition of Edgetech. Among other features, the company is demonstrating manual applications of its warm-edge spacer, of particular interest in an area where hand-crafted windows are still a norm. 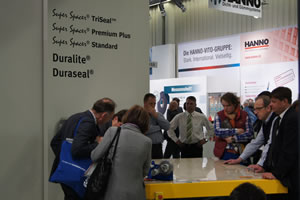 Here in Germany, and several other countries in Europe, triple glazing is becoming very common.

“In Europe it’s clear–everyone is going to triples,” says Peter Appel, international marketing and sales manager for Swisspacer, which is taking its focus on warm-edge spacer benefits to another level. The company is aiming to sell the benefits of its warm-edge spacer–improved energy efficiency and reduced condensation–to the end-user, the architect.

“Warm-edge is more expensive, but the benefits are worth it,” he says, adding that the end-user doesn’t always get the full picture of those benefits.

Also in the booth the company is showing calculations that present a clear picture of those benefits, illustrating that going from aluminum to warm-edge can improve thermal performance by approximately 18 percent, compared to the more expensive option of changing framing materials, as well as the machinery needed to make that change.

“[Changing] the spacer bar is the cheapest way to improve the whole window,” he says.

Bystronic product manager Klaus Puschmann placed the German use of triple glazing at about 50 percent. For his company, that means, “customers are looking for a solution that can produce triple glazing in the same time as double glazing and the speed’line is that [option].” The company had previously introduced the line at the flat glass industry’s glasstec event in 2010 but now, with its first time exhibiting at Fensterbau, hopes that the window manufacturing market would prove to be more important for it in the future.

Toward that end, the company is focusing on its sash’line, which since last year’s GlassBuild event has been adapted to produce clean profiles for European windows. The company also announced a sales agreement with Hegla under which the companies will share a common sales force.

Technoform is focusing its message of sustainability in a new direction. The company was talking about its bio-based polyalmides last fall at Greenbuild, and has its green (literally and figuratively speaking) thermal profile on display. That display sample window shows how the company’s products, including the TGI warm-edge spacer, can work together for improved efficiency in aluminum window systems. Thomas Henkes, product manager, expects the research on the new castor-based insulting profile to be finished and the product released by early next year. 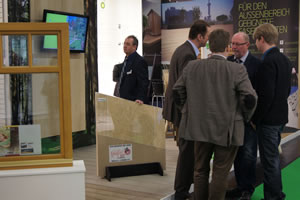 Accoya focused on showing customers the application possibilities for its product.

Accoya is also at the show demonstrating the applications for which its “modified” wood product (the company puts soft woods through non-toxic proprietary processes to improve durability) can be used. With its German distributor in the booth, the company is featuring, among other things, a door with a modified wood core that had been through its process. According to Victor Vos, general sales manager for Europe, the products’ benefits of durability and “dimensional stability” mean that once a color is applied the wood won’t shift and lose colorfastness down the road.

Renolit is here focusing on the frame color itself and is displaying a new range of finishing options. As David Harris, exterior segment product manager, explains, the polyvinlidene fluroide cover of the foil is part of the Teflon family, so it’s very simple to clean–most daily dirt should rinse away with a good rain–and cleaning chemicals don’t damage the finish. 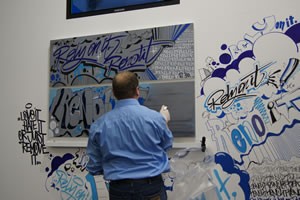 The latest frame foil from Renolit was "tested" on the show floor by a graffiti artist who demonstrated how simple the product is to clean.

Should the foil have a scratch, dent or gouge over its life, the company now has an answer for that as well. A recently launched repair service is being demonstrated on the show floor, allowing attendees to see the 15- to 20-minute repair process and the clean appearance of the repaired frame.

In addition, Renolit is featuring a new range of colors. Interior frames can benefit from sleek and realistic wood grain films. Based on architectural demand, the company also has a new metallic range of foils. Harris notes that PVC frame producers are finding that line to be of particular interest as it somewhat mimics the appearance of aluminum frames, giving them a step into that market.

Look to www.dwmmag.com for more news and updates from the Fensterbau show.