At WMA, Smaller Numbers Were No Deterrent From Doing Business

That was the message from World Millwork Alliance president and CEO Rosalie Leone this week, as the association proceeded—in person—with its annual trade show. After sitting out a year and proceeding with a virtual platform in 2020, “Two years is just too long,” Leone declared. 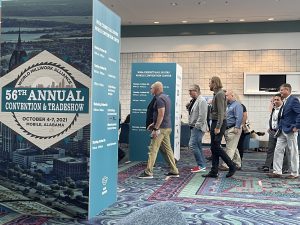 While the show didn’t draw large crowds, exhibitors said it was well worth the opportunity.

While the event failed to gather as many exhibitors and attendees as it has in past years, as a modestly sized show, those differences were less stark than they might be at larger events, some suggested.

“Past years might have filled this hall,” said Craig Young, sales manager for TLC Mouldings. “But that only leaves, what, that,” he added, pointing to a small area piped off by curtains. In the grand scheme of things, those size differences didn’t cut into the show’s main attraction, Young and others said: an opportunity to conduct business in person. In his 20th year attending the event, the “COVID Effect” was palpable, he said. But even those who jumped through significant hoops to attend agreed that, despite fewer people, the event was worth it. 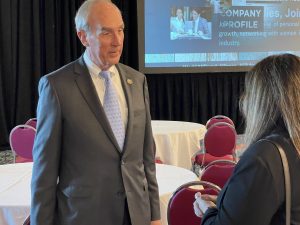 “We had to spend 15 days in Mexico in quarantine to get here,” said Luis Rodrigues, a sales representative for Rohden Doors. “The hotels in Mexico were completely full because of this, Rodrigues said. He also had to be tested for COVID-19 before entering the U.S., only to find that, “No one even asked us for our documentation,” he said.

Despite those challenges, even the two-hour window in which the trade show opened on Tuesday provided a welcome relief from remote meetings, Rodrigues declared. “We were able to use that time to meet with our customers—face to face,” he said, something he’s been unable to do since starting his job in March 2020.

“You have to remember, we haven’t been together as a team since the International Builders’ Show of 2020,” said Carol Kelly, director of sales, Rocky Mountain region, for Masonite. 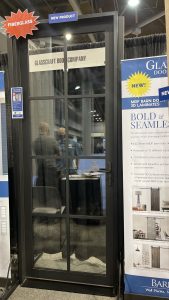 The event drew several prototypes, including a new series from GlassCraft, the FiberCraft Composite entry door.

While anticipation of a smaller event led some companies to scale back their displays and staffing, “We decided to stick with the plan,” said Stephanie Dussourd, product development manager for Endura. “We’re just taking all of the necessary precautions and putting on our masks,” she said. Not every product made it to the event, however. While Endura has worked to develop a new electronic lock to go with its multi-point locking system, it’s been slower to reach the market than originally planned, said Kevin Coughlin, Endura’s business development project manager. The company had a working prototype on hand, but with material shortages for such things as microchips, and other snags in the supply chain, Endura is biding its time before launching the product, to ensure it can deliver as promised, Coughlin said.

GlassCraft also featured a prototype, the FiberCraft Composite entry door, with a nearly all-glass design that stood eight feet tall. “This is the prototype, but this is an example of where we’re headed next year,” said Brent Ziebold, national sales manager.

The next stop for many includes the International Builders’ Show next February, buying companies several months to place the finishing touches on products. Whether or not the effects of COVID-19 will continue lingering over trade shows next year, “We’ll see,” Young declared.