At Greenbuild, The Buzzword is ‘Sustainability’

The 2015 Greenbuild International Conference and Expo opened on Wednesday in Washington, D.C., with famous faces evangelizing about sustainability and a greater emphasis on residential construction. 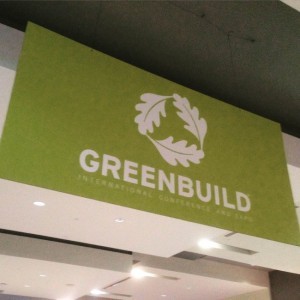 Director James Cameron, who created two of the highest-grossing movies of all time with Titanic and Avatar, was the star attraction of the opening session. He sat down for an interview on stage with MSNBC’s Mika Brzezinski. It ranged from political shots at Republican presidential candidates (he said they’re in “paid denial mode” about climate change) to an in-depth discussion about his vegan eating habits, which were inspired by concerns about greenhouse gases generated from raising cattle for meat and dairy production. Cameron, a devoted environmentalist, also gave the Greenbuild audience a virtual group hug “for what you do.”

Julian Castro, secretary of the U.S. Department of Housing and Urban Development (HUD), opened the proceedings with a brief address about the role of green construction in creating stronger communities.

“Green building is not a slogan – it’s a solution,” he said. “Buildings are more than just bricks and beams. HUD has helped make a half-million  homes greener and safer since 2010.”

Castro also urged businesses to adopt green construction practices by pointing out that they’re only going to grow in importance.

“Green means good health and more wealth in our world,” he said.

That was echoed during an address by Rick Fedrizzi, the CEO of the U.S. Green Building Council (USGBC). After bashing Republicans for thinking that environmentalism and capitalism aren’t compatible, Fedrizzi said that “there is a powerful, conservative, pro-business case for sustainability. Sustainability is profitable, and profitable is sustainable.”

After the addresses, the exhibit hall opened at the Washington Convention Center, and there were plenty of booths and educational sessions dedicated to green residential construction.

At the 2014 show in New Orleans, Greenbuild put more emphasis on the residential sector. USGBC surveys at the time revealed that 50 percent of attendees were involved in residential construction, with 20 percent working exclusively or primarily in that segment.

In response, there were even more residential offerings in 2015, including numerous educational sessions focused on single-family and multi-family construction, a dedicated residential products pavilion in the expo hall, and the Greenbuild Unity Home, a LEED Platinum, net-zero-energy demonstration house built on the show floor.

Here’s a time-lapse video of the Unity home being built:

Greenbuild spans the entire spectrum of construction, but there were several door and window companies with products to see.

Andersen displayed an A-Series hinged patio door that’s available in sizes up to ten feet tall. Additionally, the company revealed that it now offers triple-pane glass in its A-Series windows.

Another highlight in Andersen’s booth was a wall section from Habitat for Humanity’s Eco Village in River Falls, Wisc. The project, which features homes built with a carbon-negative, net-zero-energy approach, uses the company’s 400 Series products.

“The village in itself has just been a phenomenal project, and that’s why it’s being featured here,” said Andersen’s Dan Grubish.

Marvin’s booth featured its Integrity line of doors and windows made of Ultrex, the company’s patented pultruded fiberglass.

“Integrity is more of a generational product,” said Tim Coates of Marvin. “As far as sustainability and green building practices, you can reclaim it or recycle it, or pass it on from generation to generation.”

Marvin also showed off its Ultimate Multi-Slide Door, which comes with a water and air design-pressure rating.

Functional Fenestration of Hawthorne, Calif., displayed a fire-alarm actuator that automatically opens all windows in a residence or business for smoke evacuation.

The company also displayed Winkhaus flush tilt-and-turn window hardware that could help make that product more popular in the U.S.

“Tilt-and-turn windows are extremely popular in Europe, but the challenge in the U.S. is the style,” said Jim Roberts, president of Functional Fenestration. “This looks like a standard North American window, but it’s a tilt-and-turn. It really opens up the possibilities for residential. You can replace a traditional casement window in your home now, put in a new tilt-and-turn, and it’ll look identical to what you had in there.”

Intus Windows’ booth was one of the busier ones on the show floor, with good reason – its high-performance windows were featured in the Greenbuild Unity Home, a showcase of sustainable building products that drew long lines on opening day. The company showed off its Arcade unplasticized polyvinyl chloride (U-PVC) window for the multifamily market. The Arcade line also offers an operable tilt-and-turn design that allows the entire unit to open. The triple-pane glazing options achieve a DP70 rating (Design Pressure) and thermal insulation up to R7.

Velux showed off commercial and residential skylights for optimizing daylighting and ventilation. The residential product, Fresh Air, features a solar power panel, a rain sensor and a remote control.

Exhibitors said they were seeing strong traffic at their booths, and many said that attendance was significantly greater than earlier shows.

“The traffic’s been surprisingly good,” said Jeff Locke of Velux. “I haven’t been to this show for a couple of years, and it’s more traffic than I remembered. I think scheduled attendance was a little higher than normal.”

“We’re actually surprised with the amount of traffic,” said Patrick Lentz of Pleotint. “Every year, there’s more focus on green building. I think it’s getting kind of scary the way the climate is changing. We need to do something about it.”