At AIA, Fenestration Exhibitors Focus in On Modern Trends

Across the show floor at the 2016 American Institute of Architects Convention last week, the word “contemporary” was repeated over and over, from one booth to the next. The event was held Thursday through Saturday in Philadelphia. 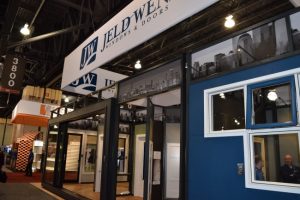 Large doors, such as the LaCantina multi-slide (pictured left) featured at Jeld-Wen’s booth, were popular at the AIA show this year.

This focus on modern-style trends was reflected in the widespread display of dark-colored products, particularly in the residential door and window arena.

Solar Innovations, in fact, did a “blackout” for its booth, in which every single product displayed was black. Pella also emphasized this color trend.“Deeper and darker seem to be the buzzwords,” said Ply Gem Windows vice president of marketing Mark S. Montgomery.

Ply Gem set up its booth to simulate the environment of a contemporary home, office and café—hence its theme “Live, Work, Play.”

Montgomery said the three things he typically discusses with architects at AIA are design, functionality and performance. The company, which displayed its vinyl window products, also had a section demonstrating its new software models for Building Information Modeling.

Elsewhere, large doors were ever-present at the show, with many exhibitors showing off their fenestration products that bring the outside into the home.

Jeld-Wen Window and Doors architectural consultant Arne Godtfredsen said multi-slide doors continue to grow in popularity and that the LaCantina multi-slide system his company was showing garnered a lot of attention from architects. He added that it is introducing a vinyl multi-slide in June.

Panda had its new PandaSelect multi-slide system on display. The system was designed for “budget-driven” projects and provides four different frame material choices, with standard panel sizes up to ten feet talk and five feet wide.

Andersen also showcased its large doors, some that span as tall as ten and 11 feet high.

The company used the trip to Philadelphia as an opportunity to support the nearby St. Christopher’s Hospital for Children. Visitors to its booth Thursday helped put together gift boxes filled with toys for patients of all ages. The company worked with the organization Cheeriodicals for the activity.

Many fenestration companies at the show featured products for historic retrofit applications or to replicate the aesthetics of older windows while meeting stringent modern-day standards.

Marvin showcased its Next Generation Ultimate Double Hung, which architectural consultant Steve Ihlenburg said is “a super high-tech window with a wood look.” The window, which has minimal sightlines, maintains a wood aesthetic where a metal track would normally be visible.

“Every detail of the window is important,” said Lance Premeau, Kolbe’s product and market manager. He said this new sash lock option is an example of how Kolbe’s windows can be tailored to fit the aesthetics of the building.

Graham Architectural Products showed its fixed offset window, which can be applied if an architect or building owner is looking to match a hung window for aesthetic purposes but doesn’t want the actual operability for safety, security or cost reasons.

While many companies on the show floor demonstrated brand-new products, others brought back not-so-new products in fresh ways.

Pleotint featured its thermochromic glass called Suntuitive, which tints based on heat from the sun. Since the show is inside, the company got creative this year and is giving out small samples of its glass, which attendees can dip into warm water to show how the glass tints depending on heat, as it would with the sun.

Pleotint also showed an example of Suntuitive in a triple-glazed unit. Pleotint marketing manager Patrick Lentz said triple glazing still isn’t big in the U.S. but makes up 30 percent of the Canadian market and much more than that in Europe.

Stay tuned to DWMMag.com this week for the May newscast for more from the AIA show.