Although the U.S. International Trade Commission (USITC) announced the results of a final antidumping duty and countervailing duty (AD/CVD) investigation into wood mouldings and millwork products imported from China in early January, that doesn’t mean suppliers have digested all this info and what it means for their businesses and the market as a whole. With the goal of helping them through the maze of related information, the Moulding and Millwork Producers Association (MMPA) held two webinars last week for its members. 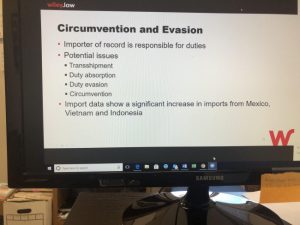 One of the presenters, Tim Brightbill of Wiley Rein LLP, representing the Coalition of American Millwork Producers, pointed out that investigations will continue as evasions and circumventions, may continue to exist.

“Additional publicly available information indicates that certain U.S. companies may be importing products described as wood mouldings [and other products that fall within the scope – including door jambs and finger-jointed boards] using incorrect HTS numbers,” he said. “We are monitoring potential transshipment through a variety of third countries, including Canada and Mexico.”

As far as the ITC ruling, Brightbill summed it up with some key takeaways:

• AD/CVD orders against certain Chinese products will be issued February 18, 2021;
• Commerce has determined the final AD and CVD rates;
• AD/CVD duties are in addition to China Section 301 duties;
• Current and future shipments are likely subject to high duties;
• Importers of record are liable for duties;
• Appeals and reviews can affect duty rates retroactively;
• Final duty rates are not known for years after entry; and
• Duty absorption, transshipment and evasion are illegal.

The second session for MMPA members was presented by Jeff Grimson, Customs/Trade Lawyer at Mowry and Grimson, PLLC, who pointed out, “This Chinese dumping order will be around for 10 years.” 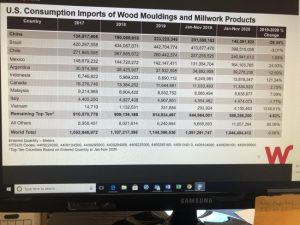 He also shared a question he gets asked extremely often: Can’t President Biden come in and change all this? The short answer, according to Grimson, is no. “There is no legal mechanism for him to do that as the ITC is an independent agency,” he said. He also said no major changes will take place, as a result in party shifts.