Are Green Building Codes ‘A Food Label For a Building’?

The importance of environmental transparency in the manufacture of doors and windows was a big part of the second day of the American Architectural Manufacturers Association (AAMA) fall conference in Cambridge, Md., on Tuesday. 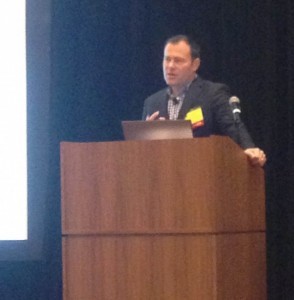 Smith said transparency is a major focus of green building codes and standards – and that represents a big change from the past.

“We know what’s in our food, where it came from and what happens at the end of its life,” Smith said. “We do not know the same about the building products that surround us every day.”

To that end, many top U.S. architecture firms have informed their suppliers that they’ll be giving preferential treatment to products with health product declarations.

Smith said declarations and certifications are driving market transformation and leading to the buildings of the future – and they’re also good for business.

“If you can do this, it allows you to start differentiating your product in the marketplace,” he said.

Smith said LEED is on a continuous improvement cycle that moves toward not just “less bad,” but “more good” in terms of the environmental impact of buildings. He said LEED v4 is the first substantive update of the credit requirements in LEED’s 13-year history.  It will require manufacturers to take a much more sophisticated look at materials used in the production process.

“Almost every credit and prerequisite has substantive changes to the requirements,” he said. “There are new prerequisites, like one for construction waste management.”

He said LEED v4 will take some getting used to, but it won’t be required until November 2016.

Basically, Smith said it will try to answer three key questions – where is the product made, how it’s made, and what’s in it.

“LEED is intended to push the ceiling and pull the floor of building performance – that’s market transformation,” he said.

Smith said the new credits reward openness about a product’s ingredients and environmental footprint. That means data reporting is more important than ever, because it’s needed to establish performance thresholds.

Smith said one way companies can get credits in LEED v4 is through environmental product declarations (EPDs).

EPDs measure environmental impacts to air, water and the earth. Grades are given in each of those categories. Smith said that EPDs might be highly technical, but they aren’t 100 percent scientific.

“EPDs are more art than science,” he said. “It’s a little bit more of a term of art.”

As part of his discussion about EPDs, Smith gave attendees a refresher course on life cycle assessment (LCA), which looks at the impact of a building product, a material, or a whole building over its entire life cycle.

EPDs present quantified environmental data for products or systems based on information from an LCA. Smith said it could be a more sophisticated and results-oriented approach, especially when compared to single attributes like recycled content.

“It’s similar to a food label for a building,” he said, adding that he’d like to see EPDs become the industry standard.

“There are 400 green rating systems out there,” he said. “I’d rather that there was just one, and I hope EPDs become that.”

Smith said making an EPD also can help manufacturers find the parts of their production process that have negative environmental impacts.

PCRs are defined in ISO 14025 as “a set of specific rules, requirements, and guidelines for developing environmental declarations for one or more products that can fulfill equivalent functions.” They’re a crucial component of any LCA. The PCR for windows was developed in collaboration with the Glass Association of North America, the Insulating Glass Manufacturers Alliance, and the Window and Door Manufacturers Association.

Mark Silverberg of Technoform, co-chair of AAMA’s Life Cycle Assessment Oversight Committee, said the organization will focus on education via the development of web resources under the Green Initiatives section of AAMA’s members-only website. He also said AAMA will strive to bring engaging speakers to conferences, with an emphasis on manufacturers.

Additionally, Silverberg said the National Association of Home Builders will have a first-of-its-kind presentation at the upcoming Greenbuild conference in Washington, D.C. entitled “What Green Homes Mean to Buyers.”