Architects Have Plenty of Pull in Window-Related Product Development

More than 700 exhibitors re-convened Friday at Chicago’s McCormick Place for the second day of the American Institute of Architects’ national convention, AIA Convention 2014. 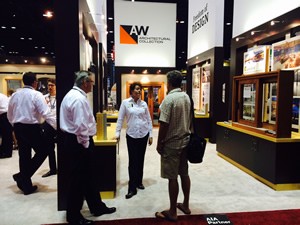 Stacey A. Einck of Andersen Windows speaks with attendees at the AIA Convention in Chicago.

Many of the exhibitors at the show are directly affiliated with the glass and glazing industry, and that’s because much of what they do—whether they’re glass manufactures, window manufacturers, fabricators or hardware producers—is in response to the demands of architects.

That relationship has been in play during the development of SageGlass’s electromagnetic glazing systems.

“Everything we do is really in response to the market,” says Dr. Helen Sanders, vice president of technical business development at SageGlass, in explaining the company’s development of more color choices with their electrochromic glazing.

“They want to be able to tune their building to their design,” she says. “So they want the blues, the greens, the greys—they want a more uniform look to their building. So that’s certainly why we’ve developed that product improvement.”

Stacey A. Einck, manager of brand publications and social media with window manufacturer Andersen Corp., adds that the demand of the design marketplace has driven a lot of Andersen’s product designs.

Einck notes that Andersen’s A-Series product line that began half a dozen years ago was developed side-by-side with Sala Architects, a leading firm in Minnesota.

“What Sala helped us to do is really understand what architect were looking for and helped us kind of solve the integration issues that builders face,” she says. 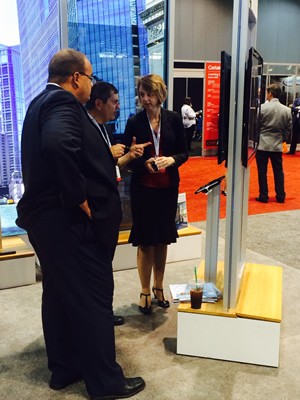 Energy codes are a major driver in product development for all sectors of the construction industry, particularly with those related to glass. And often times the demands from the design community coincide with that part of the process.

Sanders says Sage’s developments in its electrochromic glazing—including the broader range of colors and improved aesthetics in its neutral color—has helped ease that tension for architects. Einck adds that Andersen’s attention to energy efficiency has also been a help to the design community.

“Sustainability is a huge part of our business, not only how our products perform but how we manufacture,” she says. “… Lots of times, that’s driven by the architectural community, where someone says, ‘I’m building this building, it’s going to be LEED standard X, whatever they choose, and we need a product that’s able to meet that. And we’ve been able to bring that to the marketplace.”

tesa tape is a first-time exhibitor at AIA and is working to sell architects on its concept, which involves replacing welds, mechanical fasteners and rivets with tape.

tesa market manager of building supply Steve Curiak says the company, which currently caters mostly to facades, has been well-received so far, though he continues to learn about the importance of strong communication and collaboration with designers.

“In the marketing side and in talking to architects, I’ve learned there are some paradigms in the industry with how things are done,” he says, “and sometimes it takes some time and convincing.”