An order filed this week by the United States Court of Appeals for the Fourth Circuit denied a request by Jeld-Wen Inc. for a rehearing en banc, after the court upheld a ruling requiring the door and window manufacturer to divest of its Towanda, Pa.-based manufacturing plant. A petition for rehearing en banc asks a court to reconsider the decision of a panel in cases that include matters of exceptional public importance, or a panel ruling appears to be in conflict with prior decisions. In an opinion filed in February, a panel of three judges upheld the outcomes of a trial-by-jury process in 2018, finding that Jeld-Wen’s acquisition of Craftmaster International (CMI) in 2012 violated antitrust provisions. The trial followed an action filed in 2016 by fellow door manufacturer Steves and Sons Inc. (Steves), alleging damages on six counts, including violations of numerous sections of the Clayton Antitrust Act, an amendment that focuses on price discrimination, price fixing and unfair business practices.

In its petition, filed March 4, 2021, the company’s arguments leaned on unprecedented aspects of the case, including that it was the first in which a court ordered divesture in an antitrust suit brought by a private party. The company said the judicial panel “erred by treating breach-of-contract claims as antitrust claims,” further suggesting that, “Even if Steves had a viable antitrust claim, both laches and the traditional four-factor equitable test preclude the district court’s unprecedented divestiture order of the 2012 acquisition.”

Officials for Jeld-Wen also pointed to the span of years between the company’s acquisition of CMI and the antitrust filing, questioning the panel’s opinion that the delay was reasonable because Steves lacked any notice of threatened injury until Jeld-Wen terminated a supply agreement in 2014.

“While other courts have deemed efforts to block a merger untimely because they were not filed until the eve of the merger, the complaint here was not filed until four years after the allegedly anticompetitive acquisition was consummated, after years of effort (and millions of dollars) had been expended to integrate that acquisition,” Jeld-Wen’s petition stated, adding, “Both the traditional equitable factors and the laches doctrine should have—and in virtually any other circuit would have—sufficed to bar this woefully belated effort to unwind that acquisition.”

Following the appeals court decision, in which the judiciary panel vacated a jury’s prior awarding to Steves for $139.4 million in damages in future lost profits, representatives for Steves said the company viewed divestiture and lost profits as either/or scenarios (ultimately planning to seek one or the other). In its petition, officials for Jeld-Wen leaned on the decision to deny awards for lost profits as grounds for requesting a rehearing.

“In particular, the panel held that Steves had adequately shown it might ‘collapse’ without divestiture, and that a narrower injunction was insufficient to protect against that potential harm,” the petition read, adding, “The panel notably reached those conclusions even as it simultaneously held that any risk of future collapse was too uncertain to support a lost profits award.”

Officials also said the company devoted “substantial resources” to developing two exterior trim and panel lines, which they said are manufactured only at Towanda, in a process that’s integrated with manufacturing of door skins.

“In all events, any possible future injury could be prevented by less drastic injunctive measures,” Jeld-Wen’s request for a rehearing suggested. 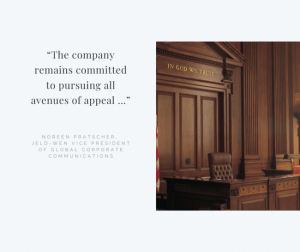 The company’s petition was circulated to the full court, after which no judge requested a poll, the court’s filing said.

“We are disappointed with this week’s decision by the full Fourth Circuit to not review the February 18th decision, but the company remains committed to pursuing all avenues of appeal,” Noreen Pratscher, Jeld-Wen’s vice president of global corporate communications, told [DWM]. “Including the next step of filing a cert[iorari] petition with the Supreme Court.”